The Year of 'Post-Truth' 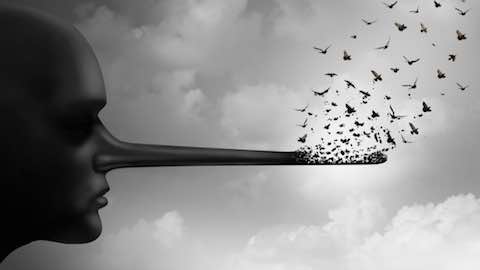 Thanks to fake news and hyper partisanship, many of us can no longer distinguish facts from opinions -- or lies.

“Post-Truth.” The Oxford English Dictionary named this its word of the year for 2016.

This was a year when campaign lies -- most, though not all, coming out of the Donald’s mouth -- were so numerous that fact checking became nearly impossible.

Yes, each individual statement could be fact checked. But there were so many rapid-fire falsehoods that it was impossible to debunk them one by one on TV without devoting entire shows to just that.

And, far too often, nobody even cared if their preferred candidate was untruthful. The internet was awash with fake news that was more popular than the real news.

One fake news story told Trump supporters that the pope had endorsed Trump, while another one told Clinton supporters that he’d denounced Trump. In reality, he did neither.

Things have hardly gotten better since the election, with Trump making false claims about “millions” of “illegal voters” and denying intelligence assessments that Russia intervened on his behalf.

This is a difficult time to teach social sciences, because students often cannot distinguish between fact and opinion.

A sociology professor I know posted on Facebook a line from a student’s final paper: “If colored people would just follow the law, they wouldn’t get shot by the police.” A real student actually wrote that and turned it in.

As a professor, you have to grade students with political views different from your own fairly. But in addition to the offensive racial term, this student’s statement makes a claim that can be proven true or false with evidence.

As the late Senator Daniel Patrick Moynihan said, “Everyone is entitled to his own opinion, but not his own facts.”

Research can determine whether police shootings of people of color are due to law breaking by people of color or not. In this case, the evidence doesn’t support the student’s conclusion.

The professor failed the student -- not for his or her opinions, but for failing to do the assignment well. What do you want to bet the student will respond by calling the professor “biased”?

I’m only a lowly teaching assistant, but I grapple with the current environment in my classroom too.

This semester, I led students in a discussion of same-sex marriage. We wrote each argument for and against legalizing same-sex marriage on the board. I asked students to determine which ones were opinions, and which made empirical claims that could be proven true or false with evidence.

Sociology can’t really evaluate opinions, like the claim gay marriage is “unnatural,” or the competing one that same-sex couples deserve the dignity of marriage.

It can, on the other hand, scientifically evaluate whether children of same-sex couples turn out okay (they do) or whether humans use marriage only for heterosexual procreation (they don’t).

By the end of class, I had a list of claims made by the anti-same sex marriage camp listed on the board, all of which were demonstrably false. Not one was true.

I must say, even though I personally support marriage equality -- as do the majority of Americans nowadays -- I felt uneasy teaching this lesson. I do my best to keep my personal political views out of the classroom, even on subjects I care strongly about.

Instead, I wanted my students to distinguish between facts and opinions, and apply their knowledge from the semester to evaluate the accuracy of empirical claims. But I knew it’d be easy to accuse me of “bias.”

A disgruntled student could even submit me to the “Professor Watchlist” -- a right-wing website taking aim at professors conservatives disagree with.

In this post-truth world, it no longer matters whether a statement is factual. If you don’t like someone’s facts, you can accuse them of “bias” and counter their truth with a story you got from a fake news site.

Especially when you’ve got the president-elect cheering you on.

Politics: "The Year of 'Post-Truth'"