The Politics of Religion 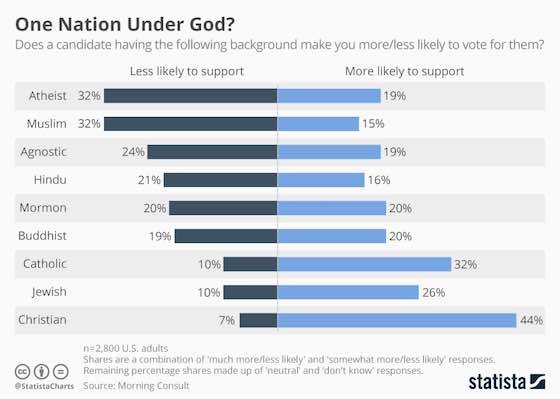 The Politics of Religion

This chart shows how the religion of a political candidate in the United States can affect their success.

If you aspire to one day become a successful politician in the United States, you're going to have to tick a lot of boxes to win over the electorate. Not only do you need the right policies and a lot of money, but according to a Morning Consult survey, it would also help hugely if you're religious -- more specifically, Christian.

When 2,800 adults were asked if knowing a political candidate had a particular religious background would make them more or less likely to support them, a clear picture emerged.

Should you campaign as a Christian, 44 percent said that this would make them more likely to support you. If however you say you're an atheist, prepare for an uphill struggle. In this case, 32 percent said they would be less likely to support a candidate. Equally, any political hopefuls of the Islamic faith would automatically start on the back foot with 32 percent of voters.

Politics: "The Politics of Religion"