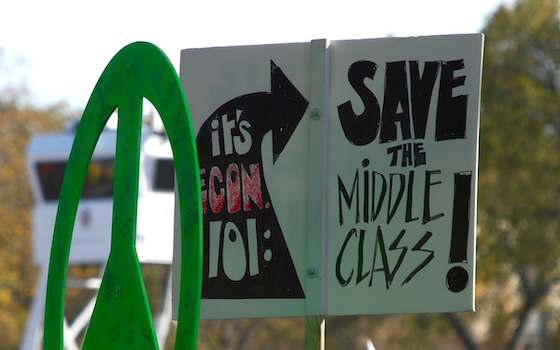 On almost every left-right issue that divides Democrats and Republicans -- as well as Republicans themselves -- there is a neglected populist constituency. The result is that populist politics are largely caricatured as extremism -- and a voice for the middle class is largely absent.

The problem with Obamacare is that its well-connected and influential supporters -- pet businesses, unions and congressional insiders -- have already won exemption from it. The rich will always have their concierge doctors and Cadillac health plans. The poor can usually find low-cost care through , federal clinics and emergency rooms.

In contrast, those who have lost their preferred individual plans, or will pay higher premiums and deductibles, are largely members of the self-employed middle-class. They are too poor to have their own exclusive health care coverage but too wealthy for most government subsidies. So far, Obamacare is falling hardest on the middle class.

Consider the trillion-dollar student loan mess. Millions of young people do not qualify for grants predicated on either income levels, ancestry or both. Nor are their parents wealthy enough to pay their tuition or room-and-board costs. The result is that the middle class -- parents and students alike -- has accrued a staggering level of student loan debt.

Universities are of no help. Their annual tuition costs have usually gone up faster than the rate of inflation. On too many campuses, vast increases in well-paid administrators, and lower teaching loads for tenured professors -- as well as snazzy new campus recreation facilities -- were all predicated on students obtaining more federal loans and going into astronomical debt to pay for those less accountable and far better off.

Illegal immigration also largely comes at the expense of the middle class. The supporters of amnesty tend to be poor foreign nationals who desire amnesty. Corporate employers and the elites of the identity-politics industry do not care under what legal circumstances foreign nationals enter the United States. Instead, the two kindred pressure groups seek cheap and plentiful labor and plenty of ethnic constituents.

Lost in the debate over "comprehensive immigration reform" are citizen entry-level job seekers of all different races who cannot leverage employers for higher wages when millions of foreign nationals, residing illegally in the U.S., will work for less money. Likewise, few worry about would-be legal immigrants without political clout who have played by the rules and are still waiting in line for a chance at U.S. citizenship.

Middle-class taxpayers are most responsible for providing parity in subsidized housing, legal costs, health care and education for those who entered the country illegally, especially once corporate employers have let their undocumented older or injured workers go.

There is a populist twist to new proposed federal gun-control legislation as well. The wealthy or politically influential, who often advocate stricter laws for others, usually take for granted their own expensive security details, many of them armed. In contrast, new gun control initiatives would mostly fall on the law-abiding who hunt and wish to defend their own families and homes with their own legal weapons.

Energy policy has become a boutique issue for the wealthy who push costly wind, solar and biofuels, subsidized mostly by the 53 percent of Americans who actually pay federal income taxes and are most pressed by the full costs of higher fuel, electricity and heating costs.

Yet the best friends of the middle class have been frackers and horizontal drillers taking their own risks on private lands. They -- not the government and not environmentalists that oppose such exploration -- are mostly responsible for the recent drops in gasoline, natural gas and propane costs to the consumer.

The Federal Reserve's policy of quantitative easing and de facto zero interest rates have stampeded investors desperate for even modest returns from the stock market -- to the delight of wealthy Wall Street grandees. The poor are eligible for both debt relief and cheap (and often subsidized) mortgage rates that remain near historic lows.

The real losers are frugal members of the middle class. For the last five years they have received almost no interest on their modest passbook savings accounts. In other words, we are punishing thrift and reminding modest savers that they might have been better off either borrowing or gambling on Wall Street.

In the last election, Republican Mitt Romney was caricatured as a voice of the wealthy pitted against Barack Obama, a redistributionist railing for more subsidies for the poor. But millions of Americans in between are not so worried about capital gains cuts on stock sales, or more food stamps and free phones. And no one is Washington seems to be listening to them.