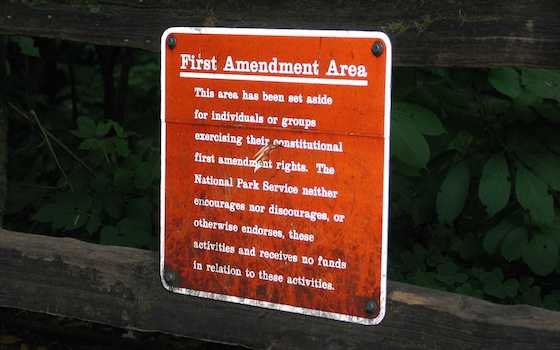 What if you believed that the planet might not have warmed up the last two decades, even though carbon emissions reached all-time highs?

Or, if the earth did heat up, you thought that it was not caused by human activity?

Or, if global warming were the fault of mankind, you trusted that the slight increases would not make all that much difference?

The would not print your letter to the editor to that effect.

The CEO of might advise that you should "get out of this stock."

Or maybe if you were a skeptical climatologist, you would cease all research and concede that man-caused global warming needed no further scientific cross-examination -- as columnist Bill McKibben recently advocated.

If you were a drought-stricken California farmer and worried about diversions of irrigation water to support fish populations, you would be told by the president of the United States that the real problem is not a failure to build reservoirs and canals, but is due entirely to global warming, which is a "fact" and "settled science."

What if you supported equality for all Americans regardless of their sexual preference, but -- like presidential candidate Barack Obama in 2008 and about half the country today -- opposed making gay marriage legal?

If you were the CEO of Mozilla, Brendan Eich, you would be forced to resign your position.

If you owned a fast-food franchise like , boycotts of your business would ensue.

If you were a star of "Duck Dynasty," your show would be threatened with suspension or cancellation.

What if you thought that foreign nationals who broke the law to enter and reside in the U.S. were aliens residing here illegally?

Three or four years ago, you would have been advised to use only the politically correct term "illegal immigrant" -- even though not all arrivals crossed the border to live permanently in the U.S. The more legally precise noun "alien" was no longer allowable.

Then, about a year ago, you would have been further advised that the adjective "illegal" was suddenly also no longer acceptable.

Yet all the while, entering and residing inside the U.S. without legal permission stayed a federal crime -- just as it is in every other nation in the world.

What if you thought that supporters of both the Israelis and Palestinians would wish to air their positions on college campuses?

If you were the Israeli ambassador, you would be shouted down at .

If you were a Jewish student organization asking to ensure free speech at the , you would probably be cursed at with racial epithets, as happened recently.

If you were a faculty member organizing a scholarly trip to Israel, you would be harassed at .

What if you were a professor at or the , who wished to teach literature that sometimes dealt with class, race, gender and sex?

If the ensuing class discussions did not meet left-wing dogma, you might soon be asked by student groups to offer "trigger warnings" on your syllabus -- as if your class were a toxic cigarette or pesticide in need of warning labels.

We are in a new Inquisition. Self-appointed censors try to stamp out any idea or word that they don't wish to be aired -- in the pursuit of a new race, class, gender and environment orthodoxy.

Hounding out people with different views is seen by the Left as a necessary means to achieve its supposedly noble goals -- just like the Spanish Inquisitioners who claimed God was on their side as they went after religiously "incorrect" Jews, Muslims and heretics.

Unfortunately, the Obama administration has been part of the problem, not part of the solution. Its appointees used the once-impartial against conservatives. They monitored reporters. They denied that the NSA was eavesdropping on average citizens. They arbitrarily chose not to enforce laws they didn't like.

The president bragged of using "a pen and phone" to circumvent the legislative branch, and urged his supporters to "punish our enemies." The attorney general calls Americans who have different views from his own on matters of affirmative action "cowards."

All of that them/us rhetoric has given a top-down green light to radical thought police to harass anyone who is open-minded about man-caused global warming, or believes that gay marriage needs more debate, or that supporting Israel is a legitimate cause, or that breaking federal immigration law is still a crime and therefore "illegal."

Our civil liberties will not be lost to crude fascists in jackboots. More likely, the death of free speech will be the work of the new medieval Torquemadas who claim they destroyed freedom of expression for the sake of "equality" and "fairness" and "saving the planet."