The Limited Effects of Tax Cuts on the Economy 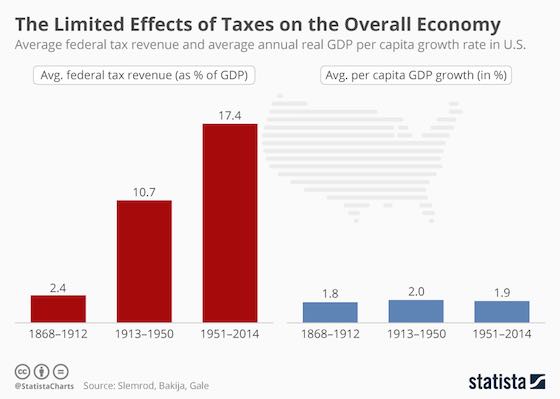 The Limited Effects of Tax Cuts on the Economy

President Trump has claimed that in the wake of the tax reform the economy could soar beyond the 3 percent growth rate. 'I think we could go to 4, 5 or even 6 percent, ultimately,' Trump predicts. However, some economists believe that tax policy isn't a viable tool for steering the economy.

Tax policy isn't a viable tool for steering the economy, one way or the other. The real impact of taxes on the state of the economy is void.

This is suggested by data compiled by economists Joel Slemrod of the University of Michigan and Jon Bakija of Williams College. "There have been huge changes in taxes throughout U.S. history with virtually no observable shift in growth rates," economist William G. Gale sums up the findings in an article for the Brookings Institute.

This calls in to question what President Donald J. Trump is trying to achieve by aiming to lower the overall tax burden. The Republican tax law, with its stated aim to ignite the economy, therefore is very likely to fail on its objective -- if it is enacted in its current or a similar form -- and assuming no other changes in tax or spending policy are made.

The time periods depicted in the chart are very different eras in terms of tax revenue.

Politics: "The Limited Effects of Tax Cuts on the Economy"