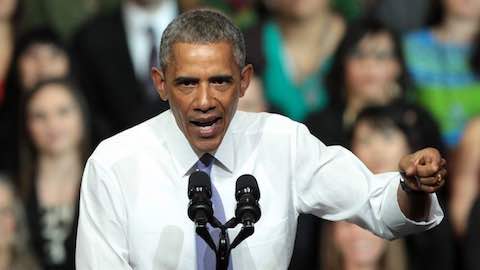 During Obama's tenure America's global leadership has declined to its lowest ebb leaving some allies to wonder how much they can rely on the United States.

Barack Obama made history when he was elected the United States’ first African-American president in November 2008. Although he was young, relatively unknown and inexperienced, he was able to beat Hillary Clinton in the primaries of the Democratic Party and then defeat Republican John McCain who was a war hero, veteran and well-known Senator. He brought to the polls groups of voters who had given up on elections, including blacks, minorities and young people, and for the first time, effectively used social networks to recruit voters and resources. His re-election for a second term confirmed the important principles of American society. Anyone can go far, even to the White House.

Obama received a difficult and complex inheritance both in internal affairs and foreign affairs and defense. He inherited a serious crisis in the areas of housing, financial institutions and industry not seen since the collapse of the stock market in 1929: a weak economy, growing unemployment, high consumption, tottering banks and a huge national debt. He also inherited two long, costly and unsuccessful wars, Afghanistan and Iraq and threats of terrorism from radical Islamic organizations.

Obama rebuilt the devastated economy succeeded to put it on a path of growth. Federal assistance contributed extensively to save the car industry, a significant segment of the American economy. Improved regulation and strict enforcement stopped the lawlessness that prevailed in the banking sector that had led to the collapse of financial institutions. Nevertheless, the construction sector didn't recover, the national debt increased significantly and interest rates are still negligible.

Millions of Americans were without health insurance creation. Then came Obama! The most significant historical achievement of Obama’s healthcare reform was a machine "Obamacare." Despite the United States being the richest country in the world, and its health care system the best, tens of millions of citizens were uninsured, not receiving minimal services. Previous Democratic administrations tried to pass the National Health Act, but Republicans whose world view sees a minimum of government intervention in the market foiled these initiatives. Despite strong opposition, Obama was able for the first time in American history to offer medical insurance to 20 million citizens. Despite some successes, Obamacare is a controversial subject. Opponents say it hampers medical services, while the middle class will pay more and get less and newcomers would only receive a minimal service. Republicans remain opposed to the policy.

Slowing down rather than progressing

Obama didn't manage to create a good working relationship with Congress, even when both the houses, the Senate and the House of Representatives were controlled by the Democrats. Such friction hampered him to realize his Health Reforms in other areas such as labor, migration, education, energy and the possession of weapons. In due course, the confrontation with Congress virtually paralyzed the government. Although voters gave him a second term, they did not trust him enough, and after only two years divided the Congress between the two parties. The last two years has been dominated by Republicans in both houses including responded by the right-wing extremist movement "Tea Party."lection of the first black president created high expectations to reduce racism, improve the status of blacks and minorities, reduce social inequalities and widen social cohesion. The results have been the opposite. Black citizens didn't feel that there was a change in the relationship of society and government. Their neighborhoods remained neglected and unemployment,

The election of the first black president created high expectations to reduce racism, improve the status of blacks and minorities, reduce social inequalities and widen social cohesion. The results have been the opposite. Black citizens didn't feel that there was a change in the relationship of society and government. Their neighborhoods remained neglected and unemployment, delinquency and violence prevailed or even increased. More prevalent has been the killing of blacks and innocent bystanders by white policemen. Obama’s term has seen a polarization between different sectors and groups in American society and has reached a level not seen since the Vietnam War.

In the matter of Foreign Affairs and Security Obama’s legacy is seen as mixed. He promised to withdraw US forces from Afghanistan and Iraq, to strike at Al Qaeda, improve the relationship with Russia and China and achieve reconciliation with the Muslim world and historical enemies like Iran and Cuba. He made a distinction between radical Islam such as Al Qaeda that has to be fought and moderate Islam such as Erdogan in Turkey and the Muslim Brotherhood in Egypt, with whom to collaborate.

An early positive legacy of Obama was the withdrawal of US forces from Afghanistan and Iraq and the elimination of Osama Bin Laden and many other terrorist leaders. However, the withdrawal from Iraq has helped the Islamic State group (ISIS/ISIL) to control large areas of Syria and Iraq, forcing Obama to return US forces to the region, albeit on a smaller scale, and to participate in a battle for their destruction.

Obama didn't formulate a consistent policy for the Arab Spring. He is seen as someone who abandoned Egyptian President Mubarak, who he described at the beginning of his tenure as one of the best allies of the United States in the region, he ignored the successor Muslim Brotherhood in Egypt yet castigated the counterrevolution of Abdel Fattah el-Sisi.

On one hand, he participated in the NATO military action in Libya, which led to the elimination of Moammar Gadhafi and tribal civil war, leaving a situation much worse than it was before. On the other hand, he has stood aloof of the Syrian civil war, which has led to hundreds of thousands of deaths and millions forced to flee. He warned Syrian President Bashar Assad of military action if he used chemical weapons, but when reports of this emerged Obama took no action. The crisis was resolved by Russian mediation that strengthened the position of Vladimir Putin at the expense of Obama's position and American international standing.

Obama’s first visits in the Middle East were to Ankara and Cairo where he suggested the historic reconciliation with Islam and Arabs. This policy has failed. While much remains to be seen, it appears that hostility to the United States is not due to any specific policy but the negation of the values that the United States believes in and Western liberal lifestyle.

After decades of boycott and fighting Fidel Castro’s Cuba, Obama renewed diplomatic relations with Havana for a historic reconciliation. Yet Obama also thinks that the nuclear deal with Iran is his most important achievement in foreign affairs. He believes that the agreement will not only prevent or deter for many years the Iranian bomb but will also moderate the Ayatollah regime and improve cooperation with Tehran and that of the regional as a whole. However, the agreement is highly controversial and only in a few years will it be possible to evaluate success.

Obama placed a solution to the Palestine conflict at the top of the list of his international priorities. However, due to his stormy relationship with Israeli Prime Minister Benjamin Netanyahu his moves only reinforced Palestinian rejection of any plans and his eight years in office are seen as the slowest period of progress in bringing the two sides to negotiation and in resolving the dispute.

Obama’s presidency has fully coincided with that of the tenure of Netanyahu, an extraordinary phenomenon in Israel-United States relations. The two had substantive different views about the Palestine issue, settlements in the West Bank and the Iranian nuclear program. Tension was heightened when Netanyahu attacked Obama's agreement with Iran in a speech to both houses of Congress. Despite this, Obama maintained the security relation between the two countries and towards the end of his tenure signed an agreement providing Israel with military aid for 10 years totaling USD 3.8 billion per year.

During Obama's tenure the US position of world leadership which it has held since the end of World War II has declined to its lowest ebb. Following Russia’s military intervention in Ukraine and Syria, the world was reminded of the Cold War that ended in 1989. Russian President Putin set clear strategic targets and was determined to get them and protect his alliance partners. On the other hand, Obama failed to show American strength responding rather than initiating. Obama also failed to deal with the Chinese aggression in the South China Sea and North Korea’s nuclear program. In view of this, US allies in Asia such as Japan, South Korea and the Philippines were left wondering if they could rely on America in times of emergency and need.

At the end of Barack Obama’s eight years in the White House, it is only possible to offer a preliminary assessment of his legacy. Some trends are positive while others are clearly imperfect.

Only with time, access to declassified archives, and with analysis of the policies and actions of his successor will it be possible to establish a more substantive evaluation of his legacy in domestic and foreign affairs.

Glen Segell is a Fellow at the Ezri Center for Iran & Persian Gulf Studies, University of Haifa. He is retired information warfare officer having served as the Director of Research (Measures of Effect) in Iraq during the Second Gulf War. Recent books published are Civil-Military Relationships in Developing Countries (2014), Israel, Gaza and Hamas: Operation Protective Edge (2015) The Islamic State Delusion (2016), Theory and Case of Warfare (forthcoming 2017).