The Future of Civil Rights is Up To the Supreme Court 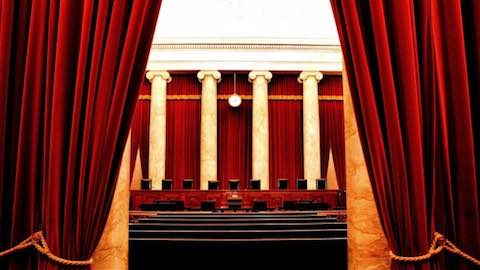 The Future of Civil Rights is Up To the Supreme Court

A single Supreme Court seat can change the landscape of our liberties -- and this election could ultimately determine four.

When 95-year-old Rosanell Eaton first registered to vote in the Jim Crow South, she was forced to pass a written literacy test and recite the preamble of the Constitution from memory. Seven decades after becoming one of the first African American voters in her county, Eaton once again found herself facing obstacles undermining her access to the franchise.

Because of North Carolina's harsh new voting restrictions, Eaton had to make 11 trips to various state agencies -- traveling a total of over 200 miles -- to get the identification she needed to vote.

So Eaton challenged the state's voter ID laws in a case that made its way to the nation's highest court. After an appeals court struck down the restrictions, the Supreme Court -- in a 4-4 tie vote this August -- declined for now to reinstate them, pending an eventual appeal.

Eaton’s harrowing story demonstrates the powerful role of each Supreme Court justice. Had there been one more conservative justice sitting on the court, North Carolina voters like Eaton would be facing the controversial, discriminatory barriers she challenged this November.

As with so many decisions in our country's history, the protection of Americans' fundamental rights came down to a single seat on the Supreme Court. It was only by one vote, after all, that the court decided the damaging Shelby County case in 2013, which gutted the Voting Rights Act -- a landmark achievement of the 1960s civil rights movement -- and allowed North Carolina to establish these discriminatory voting restrictions in the first place.

As powerful as a single Supreme Court seat can be, more than one seat hangs in the balance this November. The next president could nominate up to four justices for lifetime appointments on the Supreme Court. The outcome of the election may well determine the composition of our nation's most powerful court for decades -- and with it, the future of our civil rights.

Based on the list of judges Donald Trump has said he would consider for nomination, our civil rights could be in real jeopardy with a Trump presidency. Multiple judges on Trump's list have upheld the kind of discriminatory voter ID laws that Eaton is fighting in North Carolina.

For instance, after a lower court found that Wisconsin's voter ID law “results in the denial or abridgment of the right to vote on account of race or color,” Judge Diane Sykes -- whom Trump has named as a possible Supreme Court nominee -- nonetheless voted to reinstate the law. A Trump Supreme Court could uphold suppressive voting laws that have been shown to substantially lower turnout among minority voters.

In other civil rights matters, the records of Trump's proposed judges paint a similarly distressing picture.

In a case involving a black worker being passed over for a promotion because of his race, Judge William Pryor argued that it was just a “conversational” aside when the supervisor in the case called an African American employee “boy,” dismissing the condescending slur as not connected to promotion decisions. Equally alarming is Judge Steven Colloton, also on Trump's list, who would have refused to allow a woman who reported being sexually harassed and fired by her manager to go to trial.

Civil rights issues will continue to make their way to the Supreme Court time and again. I shudder to imagine the Supreme Court justices Trump has proposed serving as the final word on the legal questions that shape Americans' access to the ballot box, housing, discrimination-free workplaces, and other critical civil rights.

The fate of hard-won rights and liberties, like those Rosanell Eaton began fighting for more than 70 years ago, rests in the hands of the justices on that bench -- and every vote counts.

Dr. Mary Frances Berry is a professor of history at the University of Pennsylvania and serves on the board of People For the American Way. Her latest book is “Five Dollars and a Pork Chop Sandwich: Vote Buying and the Corruption of Democracy.”

Politics: "The Future of Civil Rights is Up To the Supreme Court"