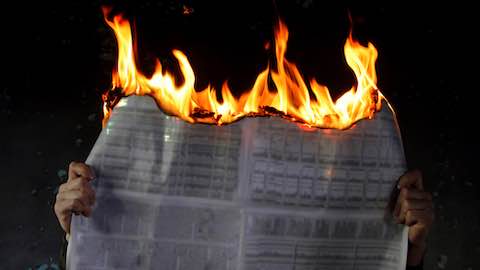 One noisy piece of the GOP's culture war bunkum is Critical Race Theory, or CRT -- a previously little-known field of academic study examining racism's central role in shaping our society.

But lately, kooky right-wingers have seized the phrase, claiming that CRT is a left-wing mind-control plot pushed by diabolical school teachers. They shriek that schools are using Critical Race Theory to program children to hate white society and "replace" it with non-Christian, multicultural rule.

That's not what CRT is -- nor is it even taught in our schools!

But that hasn't stopped power hungry witch hunters like Ron DeSantis of Florida, Greg Abbott of Texas, and (witchiest of all) Donald Trump from actually issuing executive edicts banning schools from teaching a subject that – hello! – they are not teaching.

So how did such a non-issue rise to the tippy-top of the Republican political agenda? Because of fake news.

For the past few years, thousands of articles have run declaring that CRT is infiltrating public education. They've appeared repeatedly in the Houston Republic, San Francisco Sun, Chicago City Wire, and scores of other local papers from coast to coast.

Never heard of these dailies? That's because none of them are real, local, or even paper.

They are just a few of some 1,300 hyper-partisan websites owned and run by Metric Media, a bogus news fabricator. These fake news sites spew out a gusher of articles trumpeting the big lie of a massive CRT conspiracy.

This is not innocent campaign gamesmanship but politically cynical, crazy nonsense that's causing real, extensive harm. Teachers are being fired or quitting in disgust. Sane school board members are literally being assaulted by deluded parents. Schoolkids are being fed raw ideological ignorance. And elections are being perverted.

The real crisis is not in our classrooms, but in the collapse of real local newspapers that produce real journalism.

Without them, we're ceding "news" to the shams and scams that are inevitable under hedge fund profiteers and partisan hacks that already dominate wide swaths of America's media landscape.

Journalism is an essential public resource, key to democratic self-government. America should start investing in it as such, providing adequate public funding for local, independent, watchdog reporting.