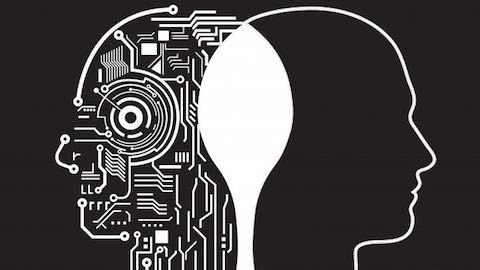 It's time to stop relying on human presidents.

Greetings from Antarctica. It's not so bad here, as long as you like tinned peas and snow blindness.

But seriously, thanks to several months of sunless winter, I've been able to learn Urdu, top my previous high score in Spider Solitaire, and catch up on my Netflix queue. I'm the only spook here among the scientists -- we put the facility under surveillance after their anti-Iraq War stunt in 2003 -- and I'm supposed to blend in as the “communications officer.” To play the part, I've watched as many science documentaries as possible, with some science fiction movies thrown in to lighten the load.

For some reason, Hollywood is fixated these days on artificial intelligence and robots. So, that's what I've been watching, and that's what has inspired this memo.

But first, thank you for the reassignment. I was going crazy on that island in the Pacific. I think all the sun and heat were responsible for the last memo I sent you back in September 2013. I realize now that it might have been a little out of line, particularly the suggestion to give pairs of Google Glass to all the world leaders so that the NSA could more easily conduct surveillance on them. Obviously they wouldn't have accepted the gift. And Google Glass has disappeared anyway.

On the other hand, perhaps you did use some of my NSA suggestions -- or benefitted somehow from my other memos on outsourcing targeted killings to the Chinese, turning our drone program into a reality TV show<, and imposing an Empire Tax on our allies -- and that explains my transfer from that horrid undisclosed location to the more comfortable quarters here at McMurdo. Yes, I realize that some people in the Agency would consider this an exile of sorts, perhaps even a demotion from a tropical paradise. But I'll take high-speed Internet any day over endless taro and coconut.

Thanks to that high-speed connection, I have been able to watch all those aforementioned robot flicks: Ex Machina, Eva, Transcendence, Chappie, The Machine, Automata, Her, Robot and Frank, Wall-E, Robocop (the remake), Surrogates, not to mention I, Robot, adapted from my favorite all-time science fiction stories. Those movies, plus news of the 2016 presidential election heating up, have gotten me thinking.

One of the key issues in artificial intelligence (AI), as I'm sure you know, is whether a computer can fool you into thinking that it's human. The vetting procedure, known as the Turing test, takes the form of an interview. If the computer can give answers to questions that are indistinguishable from what a human would say, the machine can be said to exhibit artificial intelligence.

I was recently watching interviews with the various candidates for the 2016 presidential elections -- and it occurred to me that some of them might not be able to pass the Turing test. It sounded as if they were just repeating their campaign talking points over and over. Even their jokes were stale. Of course, they all tried to sound human. But that's what a capable programmer would build into sophisticated software. An astute listener would have flunked the candidates on the basis of their limited rhetorical and conceptual vocabulary.

Well, that gave me pause. If our candidates are barely distinguishable from robots, our reliance on what the techies call “wetware” seems dangerously outdated. Since our programmers' capabilities have an inverse relationship to our politicians' capabilities, this gap between the artificial intelligence of machines and the natural stupidity of politicians is only getting larger.

We have increasingly applied automation to every facet of our economy. You can order at your table at a restaurant with an iPad and cut out the waiter; you can check in at a hotel at a terminal and cut out all the welcome staff. Computers fly our planes and soon will drive our cars. Computers are writing code, and robots are even constructing robots. Soon there won't be a job out there that can't be automated more cheaply and productively. The invention of robots will be as transformative of our species as the invention of agriculture.

It's just a matter of time before we start applying the same principles of automation to politics. If we take our biological limitations out of the equation, we can say goodbye to corruption, to sex scandals, to campaign finance reform. We can rid ourselves of election-year gaffes, routine congressional idiocies, and Ted Cruz. I'd vote for a robot. Hell, considering what constitutes the competition in most cases, I'd vote for my own smart phone.

But here's my proposal: We start at the top. It's time to stop relying on human presidents. It seems silly to put so much responsibility on the shoulders of someone with human frailties. I think we should consider putting a robot in the White House.

Let's face it, presidents have to spend their entire first terms, if they're lucky enough to have more than one, cleaning up the messes of their predecessors. But that's exactly what robots are good for: cleaning up our messes.

We have a couple of those disk-shaped vacuum cleaners here at McMurdo that we send around the floors every Sunday to suck up our dead skin, fingernail parings, discarded strings of dental floss, and the like. We send out robots to clean up oil spills and nuclear disasters. I'm sure we'll figure out a way for robots to suck greenhouse gases from the air and fart them out as benign air fresheners.

Imagine a president who reacted with absolute calm to a catastrophe. Even better: As everyone was fleeing the incoming tidal wave, our president would confidently stride into the maelstrom and assist in the humanitarian relief operation. Why just kiss babies when you can enter a house submerged under water, swim to the third floor, and rescue a stranded baby crying in its bassinet?

Catastrophe management requires multi-tasking. Soon, we'll be facing so many crises that an ordinary leader would be hospitalized from the strain of juggling everything simultaneously. Obviously it's time to outsource this kind of work to the only entity that has virtually no limit to its multitasking abilities and can figure out the tip at a restaurant without a calculator.

We always say that we want someone tough in the White House, someone who can face down our adversaries. Going toe to toe with, for instance, Vladimir Putin, our president wouldn't blink. After all, our presidential automaton wouldn't have real eyelids.

When negotiations drag into their third day of tough bargaining, all the other leaders would duck out for catnaps. The sheer difficulty of going over the fine print of codicils would weaken their resolve. But our president would be fresh and alert 24/7.

And when Putin whispers something in Russian to his top advisor about how the Kremlin will easily circumvent a ceasefire by smuggling equipment across the border under cover of night, our president would pick up the low-decibel mumble, amplify and decode it, and then respond in perfect Russian that our satellites are now in position to track the cross-border movements.

Yes, yes, I know: If we were relying on Google Translate, the president would actually say, “Vladimir, my dear crush, the comets are dancing overhead and you can wiggle your behind all you want, but we can see your underwear.” With a little more funding from the Agency, Google would be able to clean up the remaining bugs.

You might be guessing where I'm heading with this.

Right now, President Obama sits down every week to review the kill list so that our Agency can dispatch drones and take out America's enemies (plus, unfortunately, some other people who might only dislike America, some others who might not know where America is located, and even some people who hitherto liked America quite a bit).

But this seems to me an unnecessarily bureaucratic process. I want our president to make a decision and then take out the enemy immediately -- by himself. I think we should have a president who can double as a Predator drone. There's no reason why our presidential automaton should be restricted to a humanoid shape.

Ah, but you might point out that, according to the three laws of robots, “A robot may not injure a human being or, through inaction, allow a human being to come to harm.” This law takes precedence over the other two, namely obeying the orders of humans and protecting its own existence, at least according to that esteemed robotologist Isaac Asimov.

We already have an executive exception in place. Our president is authorized -- or has authorized himself, I can't remember which -- to kill people. Whoever occupies the office should have that privilege, whether they have a soul or not.

You might ask: What if our president gets shot down over enemy territory (or semi-enemy territory like France or Idaho). Well, that's the beauty part. Our robo-president is easily replaceable. His hard drive will always be backed up in the cumulus, and it can easily be transferred to an identical simulacrum. Same old president, brand new bottle.

In this way, we can jettison the debate about term limits. Every four years, our partner Google would roll out a new release: President 4.5 or President 5.3. If you think electioneering is worth preserving, we could have primaries in which Google, Amazon, and Northrop Grumman all field competitive models that visit Iowa and New Hampshire, answer questions from Candy Crowley, and go head to head against Garry Kasparov in speed chess.

I've considered the possibility that my memo is already out of date. Could it be that the current occupant of the White House is actually a robot? He is famously cool under pressure, remarkably cerebral for a president, and capable of considerable multitasking. But no, I've seen him eat a cheeseburger and make obvious mistakes like not fix the Affordable Care Act website rollout himself. He errs: He's human.

In the next election, I fully expect to see our first woman president. But after that, I think we should break another glass ceiling. It's time to put a non-human in the White House. We're America. We don't settle for second-best. And, if the Agency supports my proposal, that dictum will finally apply to politics as well.