The Balance Wheel of Democracy 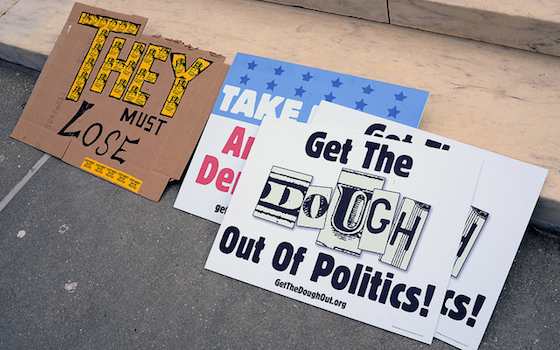 The court said such spending doesn't corrupt democracy. That's utter baloney, as anyone who has the faintest familiarity with contemporary American politics well knows.

The McCutcheon v. FEC decision would be less troubling were the distribution of income and wealth in America more equal. But over the last few decades it has become extraordinarily concentrated. The richest 400 Americans now possess more wealth than the bottom half of the U.S. population put together.

A few billionaires are now deciding on whom to place their bets for the next presidential election. Before McCutcheon v. FEC, they had to resort to bulky super PACs and so-called "social welfare" organizations. Now they can dole out their money directly.

McCutcheon v. FEC coincides with the publication in English of an important book by French economist Thomas Piketty, "Capital in the 21st Century." Piketty sees the United States and most of the rest of the world returning to the vast inequalities of wealth that were taken for granted as late as the end of the 1800s.

"It is almost inevitable that inherited wealth will dominate wealth amassed from a lifetime's labor by a wide margin, and the concentration of capital will attain extremely high levels," Piketty writes. Those levels are potentially incompatible with the meritocratic values and principles fundamental to modern democratic societies.

Piketty shows that for several centuries before World War I, the financial returns to the owners of capital exceeded the rate of growth of modern economies, creating a widening divergence between wealth and incomes. That divergence meant widening inequality between the owners of those assets and the people who worked for a living.

The gap was reversed in the 20th century by two brutal wars and a Great Depression that wiped out the dynastic fortunes of Europe and the accumulated wealth of America's Gilded Age. But in recent decades, slower growth and higher returns to the owners of capital have allowed the older pattern to reassert itself.

In this sense, McCutcheon v. FEC marks another step back toward dynastic rule, enabling the owners of vast wealth to compound their holdings through politics.

Nonetheless, I think Piketty's analysis is way too pessimistic. He disregards the political upheavals and reforms that such wealth concentrations have periodically fueled -- such as America's populist revolts of the 1890s followed by the progressive era before World War I, and the German socialist movement in the 1870s followed by Otto von Bismarck's creation of the world's first welfare state.

Even at this particularly dark hour for democratic capitalism, we see evidence of a resurgent populism and progressivism in the United States. The so-called " movement" is, in a sense, a populist revolt against large corporations, Wall Street and the establishment. And the "Occupy movement," although apparently short-lived, has found new voice in the recent electoral victories of New York Mayor Bill de Blasio and Massachusetts Senator Elizabeth Warren.

Democratic capitalism may have within it a balance wheel that Piketty too readily discounts: a public that, once it catches on to what's happening, refuses to cede control to concentrated economic power.

In turn-of-the-century America, when the lackeys of robber barons literally placed sacks of cash on the desks of pliant legislators, the great jurist Louis Brandeis warned that the nation faced a choice. "We may have democracy, or we may have wealth concentrated in the hands of a few," he said, "but we can't have both."

Soon thereafter America made the choice. After the turn of the century, public outrage gave birth to the nation's first campaign finance laws, along with the first progressive income tax. The trusts were broken up and regulations imposed to bar impure food and drugs. Several states enacted America's first labor protections, including the 40-hour workweek.

In the short term, McCutcheon v. FEC may make it easier for today's robber barons to take over American politics. But by inviting them to corrupt our democracy so brazenly, it may also fuel a popular backlash leading to a new era of reform. It has happened before.

The Balance Wheel of Democracy