The Appeal of 'America First' in Donald Trump's America 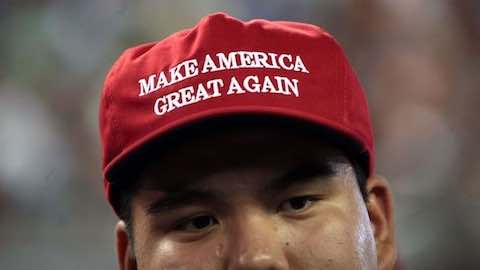 By John A. Thompson

Both the diminution of America's supremacy and the war-weariness of the American public raise questions about the solidity of the nation's extensive security commitments.

Donald Trump's campaign slogan was "Make America Great Again." But his remarks on foreign policy took an opposite tack from the way Vladimir Putin is seeking to "make Russia great again". Putin wants to extend Russia's influence over other countries -- particularly its neighbors. Trump on the other hand has talked of reducing or downgrading America's security commitments -- to NATO and also in East Asia. On the face of it, withdrawal or retreat is a less obvious path to greatness than advance. Yet, Trump evidently saw his scorn of America's allies as a political selling point.

This paradox arises from the unusual character of the international role that the United States has played since World War II. The breadth of the commitments and responsibilities it has assumed is extraordinary. Through a network of alliances with more than 60 states, the United States guarantees the security of countries across the globe, including such wealthy ones as Japan and Germany as well as threatened ones like Taiwan and Israel. Its armed forces have bases of some kind in no less than 65 countries.

All this is costly, as Trump has long been stressing (Wright, 2016). The United States is currently spending more than $600 billion on defense, more than all the other great powers combined. There are also non-monetary costs. Its alliance commitments might pull United States into foreign conflicts it could otherwise stay out of -- for example, in the Middle East, potentially with Russia over eastern Europe, with China over its expansionist tendencies.

The degree of America's self-sufficiency

As "realist" scholars have pointed out in recent years, the core security of the United States is not dependent on these extensive commitments and responsibilities. (Gholz, Press and Spolosky, 1997). Given its geographic position and military power (including its nuclear arsenal), the United States does not need allies to help protect its homeland from attack. In terms of security, it is self-sufficient. Nor are these overseas military commitments obviously dictated by economic interest. With the one exception of its need for imported oil, the nation's prosperity is not seriously vulnerable to hostile foreign actions. Because of the size and self-sufficiency of its economy, foreign trade is much less important to the United States than it is to most industrialized countries, and in any case overseas military bases are not needed to enable American business to make its way in the world.

So the world role that the United States has been playing can easily be portrayed as the product of altruism or idealism. Hence it is vulnerable to the call to put "America First" -- an old slogan that the Trump campaign revived.

America First was the name of the chief organization working in 1940-41 to keep the United States out of World War II. Its opponents described its adherents as "isolationists" but that was not really an accurate or fair description of their position, any more than it is of Trump's. Supporters of America First did not oppose trade or cultural links with other countries. Nor did most of them rule out the use of military force on occasion. They were no more pacifists than they were isolationists. They demanded a strong military to defend the United States against any danger of attack -- and to protect the interests of its citizens overseas. What they were was unilateralists. The United States should retain its freedom of action, they contended, unencumbered by commitments to other countries.

Those who advocated American involvement in World War II developed the arguments that have underpinned the domestic case for America's global role ever since. Essentially, these arguments reflect a broader conception of American interests than that of the unilateralists. In this view, a stable, open and rule-based world order that provides the conditions for flourishing international trade and political stability is a public good from which the United States benefits at least as much as do other countries. It helps prevent major wars on other continents into which the United States could be dragged (as it was into World Wars I and II). The United States benefits from collective action over terrorism (including cyber-terrorism), nuclear proliferation, climate change, health pandemics, organized crime, the drug traffic and other issues. It is also argued that America's security commitments serve to make the outside world more conducive to the country's liberal and democratic values.

Commitments reflect a sense of power

The great majority of America's security commitments were made in the decade following World War II. At this time, the United States enjoyed a historically unparalleled degree of economic and financial pre-eminence. In 1945, the United States possessed three-fourths of global invested capital and produced half of the world's manufactured goods. Following America's complete military victories in World War II, this degree of supremacy induced a sense of power among policymakers as well as Americans generally. There was a confidence that the United States could shape a world order conducive to its wider interests and values. Many influential Americans, steeped in Protestant Christianity, believed that the possession or power brought with it responsibilities that went beyond narrow self-interest. And it seemed that these responsibilities could be met at an acceptable cost. The United States provided 26 billion dollars to aid Europe's postwar recovery through the Marshall Plan and other programs but its reserves increased by nearly 6 billion dollars between 1946 and 1949. In 1950, it possessed half the world's gold, reserve currencies and IMF reserves (Thompson, 2015).

Sixty years on, the United States remains the richest and most powerful country in the world. But its margin of pre-eminence has undoubtedly lessened. America's share of global industrial production has fallen to less than 20 percent and its GNP has been overtaken by China's. There is a persistently large deficit in the country's trade balance. In this context, it is perhaps not surprising that a more narrowly nationalistic approach to foreign policy has appeal and that broader goals seem an unaffordable luxury. The funds devoted to foreign assistance have declined dramatically -- from three percent of GNP in 1949 to 0.2 percent today (Murphy, 2017). It has been observed that Donald Trump is the first President since the nineteenth century to show no concern for the promotion of democracy in other countries (Wertheim, 2017). Following the lengthy and unsuccessful interventions in Iraq and Afghanistan, the 2014 Chicago Council Survey reported that two-thirds of Americans thought that "US military actions should be limited to direct threats to our national security" (Chicago, 2014)

Both the diminution of America's supremacy and the war-weariness of the American public raise questions about the solidity of the nation's extensive security commitments. To date, the actions and statements of Presidents and other officials has served to give these wider commitments sufficient credibility to deter major, overt challenges to them. So the promissory notes have not been cashed. But, if Trump's rhetoric causes other powers to doubt that the United States would in practice honor them, the world would become a much more dangerous place for all of us -- including Americans.

Chicago Council on Global Affairs (2014), Foreign Policy in the Age of Retrenchment

Restraint in the Face of Temptation", International Security, 21: 4

Thompson, John A. (2015), A Sense of Power: The Roots of America's Global Role, Cornell

John A. Thompson is Emeritus Reader in American History at the University of Cambridge and Emeritus Fellow, St Catharine's College, Cambridge. Among his publications are Woodrow Wilson (Longman, 2002) and A Sense of Power: The Roots of America's Global Role (Cornell, 2015).

Politics: "The Appeal of 'America First' in Donald Trump's America"