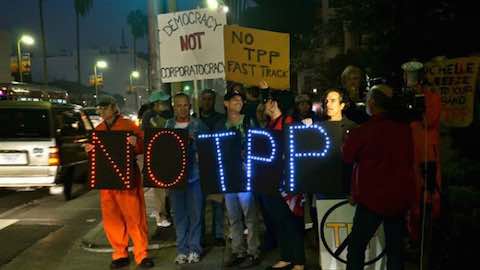 New York Senator Chuck Schumer fears that the Trans-Pacific Partnership would let corporations roll back laws at every level of government.

So when he says, “This is really troubling,” you know his eyes have been singed by something truly hideous.

That “something” is the trade and investment scam called the Trans-Pacific Partnership.

The TPP only masquerades as a trade deal. It’s actually a gross enlargement of multinational corporate power over our people’s sovereignty.

Specifically, a leaked chapter of this secretly negotiated, 12-nation deal empowers foreign corporations to challenge America’s laws, rules, and court rulings -- whether local, state, or national -- by suing our governments in private, corporate-run tribunals set up by the United Nations or the World Bank.

“Savvy, deep-pocketed foreign conglomerates,” he gasped, “could challenge a broad range of laws we pass at every level of government, such as made-in-America laws or anti-tobacco laws.”

Moreover, global corporate giants from Japan, Australia, Mexico, or other nations in the TPP could sue us not just for any actual harm they claim to suffer because of, say, our clean water laws, but for undermining their “investment-backed expectations.”

Translated from corporate-speak, that means a foreign conglomerate could haul our clean water regulations before a tribunal just by claiming that the rules undermine profits.

The corporate and governmental elites who want to keep this raw deal a secret knew that its uglies would gag you, me, and even Schumer. So they added an extra layer of secrecy, mandating that the sovereignty-busting chapter not be declassified until four years after the TPP is approved.

To help stop this sham in its tracks, join the grassroots coalition fighting it. Go to www.StopTPP.org.