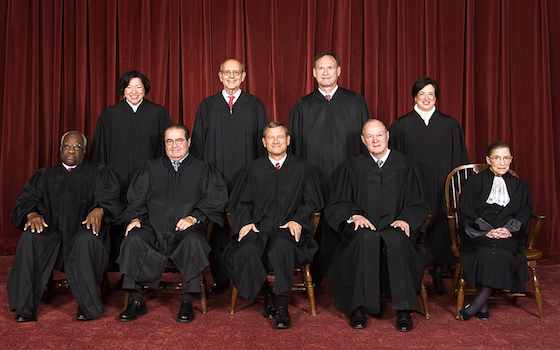 Forty years ago, enacted sweeping limits on political campaign spending in the wake of a shocking disclosure that one man -- Chicago insurance executive W. Clement Stone -- had given more than for the 1972 reelection of President Richard M. Nixon.

The amount seemed outlandish then, in a campaign in which Nixon waltzed to victory over his Democratic opponent, Sen. George McGovern, winning 49 states and losing only Massachusetts and the District of Columbia. It was an easily predictable drubbing.

Not even the revelations of the break-in by Nixon campaign operatives of the headquarters at the Watergate office complex, repeatedly trumpeted by the campaigning McGovern, could avert the shellacking. But the campaign abuses uncovered led two years later to what came to be known as the Watergate campaign reforms.

They pointedly targeted "fat cats" like Stone, imposing limits on individual contributions to presidential candidates and to party committees supporting them, and created a as monitor. But it proved to be a feckless body, and in 1976 a landmark decision, equating money with speech, ruled that "independent expenditures" not tied directly to a party or candidate could not be limited.

The law at first did hold that contributions could be restricted to combat corruption or its appearance, but First Amendment champions successfully argued that only evidence of a quid pro quo arrangement -- money in return for favors granted -- could warrant imposing of limits.

It was a caveat easily sidestepped by candidates and parties. They could simply leave certain campaign functions, such as the buying and airing of radio and television advertisements, for "outside" groups to handle. Soon W. Clement Stone's 1972 donations to Nixon would seem chump change as the flood gates opened.

The early effort to combat excessive campaign spending by creating public financing for candidates willing to accept federally imposed limits was eventually sabotaged by the free flow of fat-cat money. Candidates able to corral such money saw the federal handout as handcuffs and abandoned it, tapping the rich donors, to the detriment of their less fortunate opponents.

In 2000 and 2004, Republican candidate George W. Bush turned down the public financing for the primaries, and 2004 Democrat John Kerry did the same. In 2008, so did Democrats Barack Obama and all other Democrats except former Sen. John Edwards, as well as Republicans John McCain, Rudy Giuliani and Mitt Romney. The same year, Obama became the first to opt out of general election public money as well.

In 2010, the gates opened even more when the Republican majority on the ruled in the Citizens United decision to permit unlimited corporate and union giving. So In 2012, Obama and Romney opted out of both primary and general election federal money Finally, this week the struck again, in another decision wiping out the overall limit by individuals to candidates and parties.

The action came on the heels of a farcical pilgrimage to Las Vegas by prospective 2016 Republican hopefuls. There they figuratively kissed the ring of gambling casino magnate Sheldon Adelson, who with his wife gave more than to favored candidates in 2012. Even embattled New Jersey Gov. Chris Christie showed up, as did former Florida Gov. Jeb Bush, lately touted by strategists as their party's best hope for 2016.

Adelson has already indicated he plans to spend heavily for Republicans congressional candidates in November's midterm election. The party hopes to increase its hold on the House and regain control of the , thus further frustrating Obama in his last two years. Democratic fat-cats also can be expected to take advantage of the latest court decision to shovel more money into Democratic races to help their president.

Thanks again to the conservative Republican majority on the , big money will be dominating a fall campaign in which combative and often irresponsible advertising will flood the airwaves in congressional districts and states across the land. All in the name of the First Amendment and free speech -- for you and me, but even more so for the W. Clement Stones of today, on steroids.