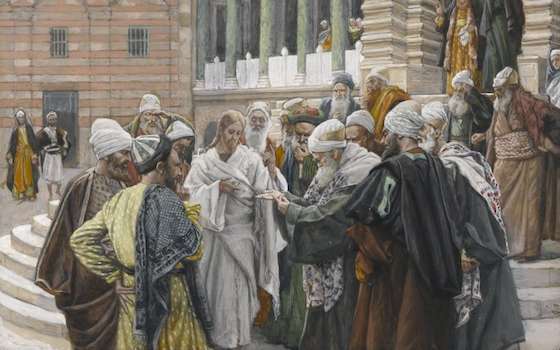 When considering what belongs to Caesar and what belongs to God, what happens when the federal government seeks to replace God by defining "church" and when life begins to have value, the latter having been done in Roe vs. Wade and subsequent court rulings?

While there are other issues in the case argued before the , these are the major ones.

To review quickly for those who haven't been paying attention, the owners of , a crafts supply chain based in Oklahoma City, are conservative Christians. They believe their faith prohibits them from offering a health insurance policy for their female employees that covers birth control, including all forms of intrauterine devices and emergency contraception. The government says the religious exception they are seeking under the Affordable Care Act applies only to churches and religiously affiliated nonprofits, such as schools and hospitals, and that for-profit companies, like , are required under the ACA to cover all aspects of women's preventative care, or face a hefty fine.

Let's consider the arguments before the Court and the response of some of the justices.

"At oral arguments," writes the , "the women justices were the most aggressive in their questioning of lawyer, former Solicitor General Paul D. Clement. Justices Sonia Sotomayor and Elena Kagan asked whether other companies should be allowed to refuse to cover other procedures, like blood transfusions and vaccines, if employers had a religious objection to such medical treatments."

I put that question to Professor Joshua D. Hawley of the . Hawley is also counsel to the . In an email, Hawley wrote: "...the Religious Freedom Restoration Act (which states that government shall not substantially burden a person's exercise of religion) does not give religious objectors a blank check. The statute requires objectors to show that they have a sincere religious belief that is substantially burdened. And it permits the government to impose the regulation anyway if the government can show that its interest is truly compelling and that it has no other viable means available for achieving it."

Specifically addressing the comment by Justices Kagan and Sotomayor, Hawley says the compelling interest standard "would likely work to defeat many other religious objections," including for blood transfusions and vaccines, because "the government could almost certainly show that it had a compelling interest in requiring businesses to pay for life-saving procedures and treatments, including antibiotics." Hawley notes the RFRA, signed by President Bill Clinton, has been on the books since 1993 and there has not been a flood of civil exemptions.

Justice Anthony Kennedy may have come up with the best compromise. He asked Clement why could not drop health insurance altogether, pay the fine and increase salaries of their employees so each could buy health insurance that fits their needs.

Come to think of it, that approach makes sense for everyone. Unfortunately, it is not the one-size-fits-all approach of the Obama administration, its Affordable Care Act and its apparent march toward a single-payer health plan, which is and always has been the liberal left's goal.

Caesar needs to get back on his side of the church-state line, which the left freely invokes when it claims the church is trespassing on the state's territory. Secular progressives seem less concerned when the state crosses the line in the other direction and seeks to impose its will on people of faith.

It's going to take a and a Republican president with courage and a new health insurance plan to repeal Obamacare and start over with real reforms that protect religious believers and enhance health care.