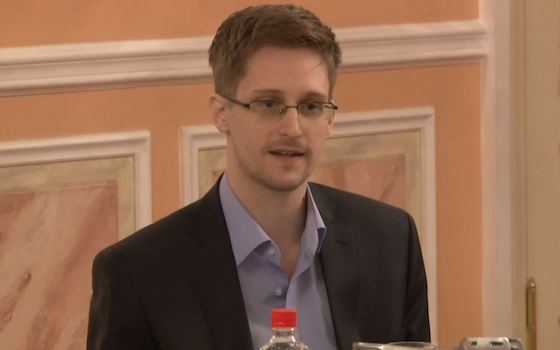 In an interview in Moscow, former surveillance operative Edward Snowden has claimed he's "already won" in his mission to throw the NSA on the defensive over its sky's-the-limit sweep of Americans' phone conversations.

Barton Gellman, the reporter who helped break Snowden's revelations, had 14 hours of face-to-face interviews with Snowden, now exiled in Russia. In summary, they convey a well-conceived and diligent undertaking to generate a widespread public clamor for much greater accountability and restraint by the agency.

"For me, in terms of personal satisfaction, the mission's already accomplished," Snowden insisted. When the journalists with whom he shared his classified information on the NSA operation were enabled to report it, he said, "everything I was trying to do was validated. ... All I wanted was for the public to have a say in how they are governed. That is a milestone that we left a long time ago."

Snowden's comments are in tune with many American liberals and libertarians who first expressed concern about the wide surveillance practices of the previous Republican administration. The deep phone sweep was justified as imperative to keep America safe after the terrorist attacks of 9/11. The laments have grown considerably louder and harsher since disclosure of the program's expansion in the Obama administration.

The president is under fire not only to justify the NSA's more intrusive policies but also to cope with allegations that top agency officials on his watch dissembled or lied about their scope. Further, he was put on the griddle in his last press conference on how the righteous-sounding Snowden should be dealt with.

Obama ducked a direct inquiry to identify a single example of how the intense phone surveillance had resulted in foiling a prospective terrorist act. He tap-danced again when reminded that the head of an NSA task force on the Snowden leaks had said on "60 Minutes" that it was "worth having a conversation about granting Edward Snowden amnesty."

Obama said only that, as president, he had to be careful about what he said because Snowden is under indictment, and "that's the province of the attorney general and, ultimately, a judge and a jury." He added, "This is an important conversation we needed to have" because the disclosures "have been damaging to the United States and damaging to our intelligence capabilities."

That caveat, of course, is the nub of the whole matter. Snowden's defenders argue that the huge phone intercept has become a rogue operation, expanded without the public's knowledge or understanding, with no persuasive evidence from the government that it has paid off proportionately.

One persistent reporter at the press conference, Ed Henry of , temporarily softened his punch by allowing that "I understand it's a tough job, and, God forbid, there's another terror attack, every one of us is going to be second-guessing you, and that is extremely difficult to be in the Oval Office." Obama brushed off the condescension, saying: "That's OK. I volunteered."

The president said in effect that he believed he was speaking truthfully earlier in saying his administration had struck the right balance between privacy rights and the need to assure national security. But the latest disclosures suggested to him that a further review of the scope of the program was in order, he said, and would happen.

The NSA task force made clear, Obama said, that "we need this intelligence," but he suggested that such programs "could be redesigned in ways that give you the same information when you need it without creating these potentials for abuse."

Obama said he needed "to evaluate all these things in a very clear, specific way and (move) forward on changes, and that's what I intend to do." That sounded a lot like conceding that Snowden had indeed "already won" in leaking the scope of the surveillance at great personal risk. Still to be to determined is what price he will pay. Meanwhile, the public jury will remain out on as to whether he should be judged a villain and a criminal, or a hero and a patriot.