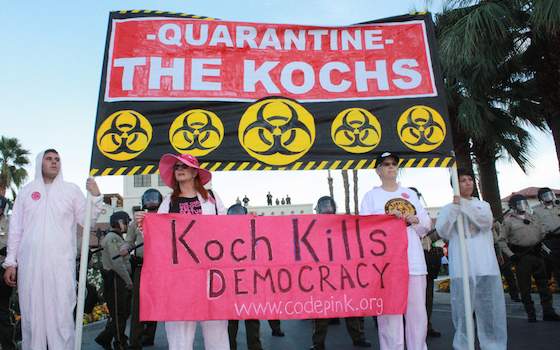 America is not yet an oligarchy, but that's where Charles and David Koch and a few other billionaires are taking us.

American democracy used to depend on political parties that more or less represented most of us. Political scientists of the 1950s and 1960s marveled at American "pluralism," by which they meant the capacities of parties and other membership groups to reflect the preferences of the vast majority of citizens.

Then around a quarter century ago, as income and wealth began concentrating at the top, the Republican and Democratic parties started to morph into mechanisms for extracting money, mostly from wealthy people.

Finally, after the Citizens United decision in 2010, billionaires began creating their own political mechanisms, separate from the political parties. They now give big money directly to political candidates of their choice, and mount their own media campaigns to sway public opinion toward their own views.

So far in the 2014 election cycle, Americans for Prosperity, the Koch brothers' political front group, has aired more than 17,000 broadcast TV commercials, compared with only 2,100 aired by groups.

The Kochs have spawned several imitators. Through the end of February, four of the top five contributors to 2014 super PACs are now giving money to political operations they themselves created, according to the .

For example, billionaire founder Joe Ricketts and his son, Todd, co-owner of the , have their own political operation called Ending Spending. The group is now investing heavily in TV ads against Republican Rep. Walter Jones in a North Carolina primary. (They blame Jones for too often voting with President Obama.) Their ad attacking Democratic Sen. Jeanne Shaheen of New Hampshire for supporting Obama's health-care law has become a template for similar ads funded by the Kochs' Americans for Prosperity in races across the country.

Last week, casino magnate Sheldon Adelson (worth an estimated ) interviewed potential Republican candidates whom he might fund in what's being called the "Sheldon Primary."

"Certainly the 'Sheldon Primary' is an important primary for any Republican running for president," Ari Fleischer, former press secretary under President George W. Bush, told the . "It goes without saying that anybody running for the Republican nomination would want to have Sheldon at his side."

In his much-talked-about new book, "Capital in the ," economist Thomas Piketty explains why the rich have become steadily richer while the share of national income going to wages continues to drop. He shows that when wealth is concentrated in relatively few hands, and the income generated by that wealth grows more rapidly than the overall economy -- as has been the case in the United States and many other advanced economies for years -- the richest receive almost all the income growth.

Logically, this leads to greater and greater concentrations of income and wealth in the future -- dynastic fortunes that are handed down from generation to generation, as they were prior to the 20th century in much of the world.

The trend was reversed temporarily in the 20th century by the Great Depression, two terrible wars, the development of the modern welfare state and strong labor unions. But Piketty is justifiably concerned about the future. A new Gilded Age is starting to look a lot like the old one.

The only way to stop this is through concerted political action. Yet the only large-scale political action we're witnessing is that of Charles and David Koch and their billionaire imitators.