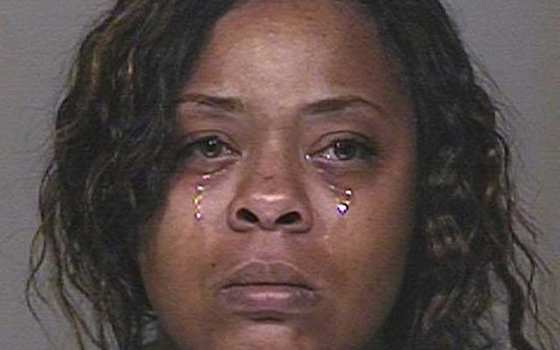 "We have got this tailspin of culture, in our inner cities in particular, of men not working and just generations of men not even thinking about working or learning the value and the culture of work." -- Rep. Paul Ryan

"You're facilitating the problem if you give an animal or a (poor) person ample food supply. They will reproduce, especially ones that don't think too much further than that." -- former South Carolina Lt. Gov. Andre Bauer

"There are 47 percent who are ... dependent upon government, who believe they are victims, who believe government has a responsibility to care for them." -- Mitt Romney

Look at her face.

Spend a few quality moments with that image -- her booking photo. it if you must, but find the image and when you do, spend a few quality moments with it. Not so you can be touched by the woeful cast of her expression, not so you can be moved by the tears trickling freely upon her cheeks. Spend that time, rather, so that you can appreciate the realness and individuality of her.

You see, Shanesha Taylor is poor and much of what passes for discussion of the poor in this country is less about people than about types, cardboard cutouts from the overheated imaginations of those who have little idea what poverty even looks like. So study Taylor's picture in order that you might understand what so many won't: She is not a type. She is a human being.

Taylor was arrested last week in Scottsdale, Ariz., after leaving her two children, ages two years and six months, alone inside a hot car, the doors locked, the windows open a fraction. It was -- let's be real clear on this -- something for which there is no excuse, though it's also something with which we have become sadly familiar. Some people leave kids in the car while they stop for a drink. Some leave them so they can hit the casino.

Taylor left her kids so she could go to a job interview. She is 35 and homeless. She had no one to watch them. She was desperate for work. She took a chance.

Now her children have been taken away and she is facing two felony counts of child abuse.

And Shanesha Taylor is the enemy. Or at least that is the narrative that is relentlessly spun by pundits and politicians on the political right. She is lazy, a taker, a moocher, a scavenger, an animal bred in a culture of poverty with an entitlement mentality and an addiction to suckling from the public teat so overpowering that she lacks even the ability to be embarrassed by her plight. So yes, by all means, cut her welfare, cut her food stamps, cut her unemployment benefits. This is what the right wing says.

About the double-dealing banks that helped trigger a 2008 financial crisis that nearly crashed the U.S. economy they say nothing. About the a year that is spent on empty military bases refuses to close even though the no longer uses or needs them, they are silent. About the the military and spent for buildings in Afghanistan that are not and will not be used, they are mute.

But let an urban legend spread about some joker using food stamps to buy beer, let some indigent seem a little too content in his meager circumstances, and you can't shut them up. This, they say, is what waste looks like. These people represent all 46 million poor people in this country. They are the face of poverty.

The poor have no lobbyists, no cable TV network, no national interest group to speak on their behalf, so the lie stands. Even so, it remains a lie.

So take a moment with Taylor's face. Apparently, she wasn't a scavenger, wasn't a moocher, didn't feel entitled, wasn't even lazy.

She was just a person who only wanted to work so she could provide for her children. That's the true face of poverty. Not incidentally, it's probably your face, too.