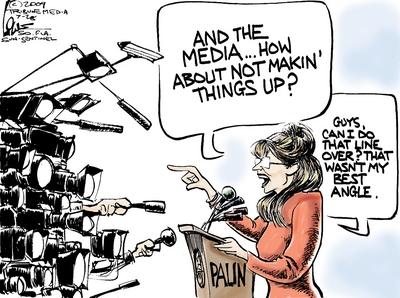 , now would be the perfect time to pop out another Palin book, and that's exactly what Weekly Standard's Matthew Continetti has done with The Persecution of Sarah Palin: How the Elite Media Tried to Bring Down a Rising Star

With his 226-page defense of Palin and slap-down of the media coverage she has faced since being selected by Sen. John McCain as his 2008 veep, Continetti is likely to ride the next wave of Palin frenzy that will accompany her book release set for November 17.

If you like Palin, it's a good read. If you don't, well, check it to see what the other side thinks of the potential 2012 presidential candidate. We won't review it here because Whispers just received the book earlier today. But here are some highlights:

The press, duh, didn't like Palin and didn't fact-check all of its stories on her

Worse, writes Continetti, the press had it out for Palin because she didn't fit the image of an -educated national candidate, just as former President George W. Bush didn't. "The left recoils at a certain swagger, a manner of speech, and a lack of cultural embarrassment that the two share. Neither Bush nor Palin mind the fact that they are not part of this country's cognoscenti. But until Palin showed up, one could have written off the liberal reaction to Bush as simply anti-Texan bias. That wasn't it, however.

Palin proved that at its root the reaction to these folksy Western politicians is a form of anti-provincialism; revulsion toward people who do not aspire to adopt the norms, values, politics and attitudes of the Eastern cultural elite," he writes.

First, the book says that the McCain press office had no biographical information ready when Palin was picked. Not only had the campaign not done its homework to defend Palin, but it wasn't prepared for the media backlash. In their defense, aides note that had the campaign flooded the state with officials snooping for info on their veep pick, McCain's surprise would have been ruined.

Continetti does cite some press tactics that worked, such as the anti-Obama "Celebrity" ad.

"Palin's sudden global fame rankled those feminists whose own path to glory had been difficult. To them, Palin was less a female success story than she was the beneficiary of male chauvinism," writes Continetti.

He holds out Fey and her TV character for special criticism. "It was telling that Fey should be the actress who impersonated Palin. The two women may look like each other, but they could not be more dissimilar. Each exemplifies a different category of feminism. Palin comes from the I-can-do-it-all school. She is professionally successful, has been married for more than 20 years, and has a large and (from all outward appearances) happy family. And while Fey is also pretty, married, and has a daughter, the characters she portrays in films like Mean Girls and Baby Mama, and in television shows like 30 Rock, are hard-pressed eggheads who give up personal fulfillment -- e.g., marriage and motherhood -- in the pursuit of professional success," he writes. "On 30 Rock, Fey, who is also the show's chief writer and executive producer, plays Liz Lemon, a television comedy writer modeled on herself.

Liz Lemon is smart, funny, and at the top of her field. But she fails elsewhere. None of her relationships with men works out. She wants desperately to raise a child but can find neither the time nor the means to marry or adopt. Lemon makes you laugh, for sure. But you also would be hard pressed to name a more unhappy person on American TV."