Sanders vs Clinton on Economic Inequality 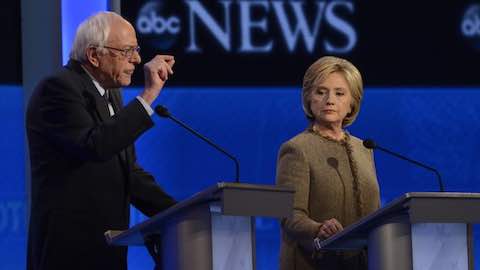 Sanders vs Clinton on Economic Inequality

If a Clinton presidency fails to deal with economic inequality and stagnation, the long-term consequence will be the strengthening of the most dangerous elements in American politics.

By a wide variety of metrics, economic inequality has been rising in the United States for quite some time. The top 1%’s share of income has increased from 7.89% in 1976 to 17.85% in 2014. When you include capital gains, those figures rise to 8.86% and 21.24%, respectively. There are many plausible reasons to find this disturbing. Research has indicated that rising economic inequality damages economic growth and social mobility. It also is linked to political corruption – the more unequal a society is, the more unequal its democratic institutions tend to be in their responsiveness to the views of people from the middle and lower classes. As a result rising economic inequality can fuel political inequalities and have perverse consequences in many other seemingly unrelated policy areas.

While both Bernie Sanders and Hillary Clinton have made a point to address inequality, their proposals are very different and reflect conflicting understandings of the scale and nature of the inequality problem.

Glass-Steagall, Breaking up the Banks, and Financialization

In most of these areas, Sanders’ plans call for a bit more than Clinton’s do. From an inequality standpoint, the biggest difference is their attitudes toward the financial sector. When Sanders and Clinton debate Glass-Steagall, breaking up the banks, and the financial transaction tax, Clinton is always quick to point out that many economists do not believe that these proposals are necessary to prevent a re-run of the 2008 economic crisis. As Bill Clinton put it: “Look at all the grief I got for signing the bill that ended Glass-Steagall. There’s not a single, solitary example that it had anything to do with the financial crash.”

Clinton’s supporters believe the crisis had more to do with shadow banking. For Sanders, the focus on 2008 misses the point. Some Sanders endorsers like Robert Reich do believe it will serve an important regulatory function. Let’s bracket the regulatory question, because it does not directly impinge on the question of inequality. In any case, Sanders does not want to shrink the financial sector for purely regulatory purposes–he also wants to shrink the financial sector to weaken it politically and economically. Since the 1970’s the US economy has become far more heavily dependent on the financial sector. Finance’s share of GDP rose from less than 15% in the 1950’s to almost 25% by the mid-00’s. Its share of corporate profits rose from less than 20% to more than 40%. Even non-financial firms have become more dependent on investment income–the ratio of investment portfolio income to cash flow for non-financial firms has risen from less than 0.1 in the 50’s to over 0.4 by the 00’s, and whereas most of this income once consisted of dividends and capital gains, in recent times it has become dominated by interest payments. This reliance of the economy on finance distributes resources away from workers and consumers and over toward investors, driving growth in inequality.

This financialization depresses demand and encourages bubble formation, as ever larger sums of investment chase ever decreasing amounts of consumer demand. The period of financialization coincided with a period of stagnant wage growth and rising household debt, as lenders attempted to prop up sagging demand by offering consumers loans in place of wage increases. High inequality generated in this way is a source of long-term economic instability and a drag on economic growth. But even if the causal mechanism here postulated between financialization, rising inequality, and stagnation proves unfounded, it is undoubtedly the case that inequality and stagnation currently accompany each other and that this combination raises legitimacy concerns. A highly unequal, stagnant economy is not able to deliver regular increases in living standards to enough of its people enough of the time for the political and economic system to legitimize itself from an outcome standpoint. In the meantime, the concentration of material wealth in the hands of an elite also grants (or at least appears to grant) that elite greater power and influence over the political process, causing large numbers of people to call the political system’s process legitimacy into question. Contemporary populists claim that the system is rigged to benefit some subgroup at the expense of the rest. Left populists claim the system is rigged in favor of the rich, while right populists claim that the system is rigged in favor of immigrants, foreigners, or specific racial or ethnic groups. The longer high inequality and stagnation appear together, whatever their joint or separate causes, the stronger these populist movements become.

If financialization is a primary cause of rising economic inequality, either because it directly distributes wealth and income away from workers and consumers and toward investors and the wealthy or because it increases the political power of the financial elite, then reducing inequality requires that the state rollback financialization. Only Sanders is promising to actively attempt to shrink the financial sector, which means that only Sanders can really deal with the problem.

Throughout the campaign the concern has been raised that even if Sanders is the only candidate willing to deal with the problem, he is not able to do so because of institutional obstacles. It is certain that if congress remains dominated by the Republican Party, a President Sanders would find it quite difficult to achieve most of his political objectives. But while this generally holds, it is not always so.

Take for instance the case of breaking up the banks. There are three ways Sanders might attempt to break up the banks:

Without control of Congress, 1 would be off the table, but 2 and 3 remain feasible. It is possible that the regulators on the Fed’s board of governors would resist Sanders. But the president appoints the board of governors, albeit to 20 year terms. Even if we assume that every person currently on the board of governors would resist an effort to break up the banks and that Sanders must obtain a majority from scratch, it might still be feasible. There are currently two vacancies on the Fed board, which Sanders could try to fill. There are also a further two members whose terms will expire–one near the end of Sanders’ first term in 2020, and another toward the end of a potential second term in 2024. If he filled the vacancies and replaced those two, that would give him a majority of 4 out of 7 with a further 11 months to carry out the break up.

Of course, the Senate could try to deny Sanders’ appointments, but it would be difficult to do this indefinitely and if Sanders enjoyed wide public support such moves could endanger the Republican Party’s grip on congress and cause it to lose control in 2018 or beyond.

It is also unclear that the Republican Party will reward Clinton for being less ambitious. Nearly all of Barack Obama’s major legislative accomplishments occurred in his first two years, before the Democrats lost Congress in the 2010 midterm election. The number of laws passed after 2010 declined significantly and those that were passed were less impactful. What is more, under Obama the top 1%’s share of income increased–as Sanders is fond of saying: 58% of the new income gains post-2008 have gone to the top 1%. Indeed, the top 1%’s income share has increased under every Democratic Party presidential administration since Jimmy Carter, and Bill Clinton’s administration was the second worst for inequality since the Great Depression. This indicates that over the last few decades, traditional Democratic presidents have either failed to implement their legislative agendas or enacted policies that actively contribute to inequality either because they have come to deliberately ideologically align themselves with trickle-down economics or have a flawed understanding of the consequences of their policies.

This ought to make us wary of Clinton’s ability to deliver. History suggests that the milder solutions she proposes are inadequate, either because they will not be passed or because if they were passed they would not make much difference to inequality. The emphasis Clinton places on appointing judges to overturn Citizens United is myopic–inequality increased long before that decision was made in 2010. Indeed, the fact that the Supreme Court was constituted in such a way that it could make the Citizens United decision in the first place is evidence that before that decision our institutions were already in the hands of the very people a repeal of Citizens United is meant to save us from.

If elected, Bernie Sanders will likely face serious institutional obstacles. He may not be able to accomplish very many of his objectives. But the same is likely true of Hillary Clinton, and the policies Clinton proposes do not target financialization directly and are not robust enough to substantively change the distribution of wealth in a serious or permanent way even if they are enacted. The dichotomy we are often presented with, where Sanders is pie in the sky while Clinton is a pragmatist who gets things done, is deeply misleading. The reality is that Sanders’ plans, while radical, could in theory potentially meaningfully address the financialization problem, while Clinton’s plans make no attempt to do so. Clinton seems to believe that financialization has, on balance, done more good for the economy than harm. Sanders does not. This is a crucial difference, and it goes well beyond questions of degree of idealism or pragmatism. It is a fundamentally different way of understanding the causes and consequences of inequality in contemporary context. If you view the financial sector as dangerously oversized, such that it contributes to inequality while dragging on growth and empowering oligarchs, your policy solutions must necessarily be different from someone who views the financial sector as mildly under-regulated but fundamentally an asset in its current form.

It is clear that if the financial sector were to grow indefinitely, at some point this would become a serious problem. We cannot have an economy that wholly consists of investment. There must be goods and services for those investors to invest in, and there must be consumers with disposable income available to consume those goods and services. At some point there must surely be diminishing marginal utility as investment increases, and there ought to be a serious conversation about where that limit is and whether or not it’s been reached. By construing the Sanders/Clinton debate as an idealism/pragmatism debate instead of as a debate about this fundamental difference, the public is losing an opportunity to have an essential discussion about pivotal, fundamental features of our economic and political system.

If we do not have this discussion, and Clinton wins the election, and she follows past Democratic Party presidents in failing to stop inequality and stagnation from persisting and deepening, the sense the public has that the system is rigged and illegitimate will only continue to grow. Unless there is a primary challenge in 2020, no one will raise the argument from the left. Disaffection will fuel right populism even more than it already has, and a Donald Trump-type figure will have even more electoral potential than the real Donald Trump has right now. Instead of raising the question of financialization and inequality, right populists will attempt to blame stagnation on foreigners and marginalized groups. This is the danger of backing Clinton: if she fails to deal with inequality and stagnation (and there is little reason to think that she will succeed) the long-term consequence, rightly or wrongly, will be the strengthening of the most insidious and dangerous elements in American politics. Concerned citizens ought to be more concerned about this possibility than we seem to be.

"Sanders vs Clinton on Economic Inequality"