Safe Tap Water Should Be A Human Right 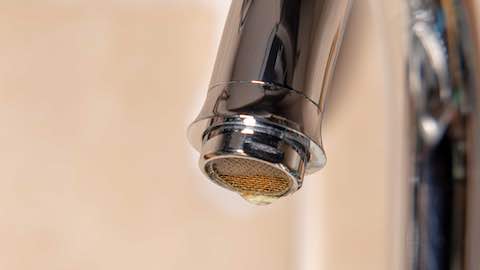 From Michigan to Mississippi to Tribal communities in the West, millions of Americans don't have safe tap water.

The water drips lethargically from the tap, if at all. Its appearance shifts from chemical brown sludge to ghoulish clouds. The accompanying stench is revolting.

Unsafe tap water is unacceptable in any modern society. But from Michigan to Mississippi to Tribal communities in the West, people across the United States are all too familiar with it as climate change, environmental racism, and privatization take their toll on this resource that sustains all life.

Over 2 million people in the United States live without running water.

This includes 10 percent of Indigenous Americans, whose communities have been harmed and impoverished by decades of racialized federal disinvestment. Their water insecurity, particularly within the Colorado River Basin, has been compounded by climate change-induced drought and contamination from mining companies -- as evidenced in the arsenic-laced water on the Arizona Hopi Reservation, to take but one example.

It wasn't the first time the city experienced water disruptions. "We've been crying about our water for a long time," resident Charles Wilson III told CNN. The EPA confirms that some 300 boil advisories have been issued in Jackson over the past two years.

This reality speaks to the larger problem of environmental racism, where race determines "which communities get resources for infrastructure and which ones get left behind," explains Dr. Robert Bullard, a renowned expert at Texas Southern University.

Following the integration of public schools during the 1960s, wealthier white people left Jackson and eroded the city's tax base. The remaining majority-Black population has since endured high rates of poverty and persistent disinvestment.

For years, Mississippi's Republican legislature has withheld adequate funding to upgrade the majority-Democratic city's aging water system, parts of which are over 100 years old. Mississippi lawmakers have also blocked attempts by the city to raise infrastructure funds through a sales tax hike.

Without state funds or tax revenue, Jackson simply can't raise the $1 billion needed for infrastructure improvements according to Jackson Mayor Chokwe Antar Lumumba. Instead, Mississippi Governor Tate Reeves has stated that "privatization is on the table" to fix Jackson's water supply.

But privatization is part of the problem.

In 2010, the city signed a $90 million contract with Siemens to overhaul its water infrastructure and install new meters to raise extra revenue. However, as journalist Judd Legum reported, the meters were installed incorrectly and there were "no substantial investments made."

Other water privatization attempts, from Pittsburgh in the United States to Bolivia abroad, have led to skyrocketing costs and plummeting quality for vulnerable communities. In the all too recent case of Flint, Michigan, public disinvestment conspired with private corporate interests to deny residents clean water -- with catastrophic results.

Almost half of the residents in Flint, the majority of whom are Black, live below the poverty line. In 2014, Republican state officials forced a cost-cutting change in the city's water supply source that resulted in countless cases of lead poisoning, over a dozen deaths from Legionnaires' disease, and scores of other health problems, all while residents saw their water rates soar.

Executives at Veolia, the world's largest supplier of water services, knew that families in Flint could be at risk of poisoning, but the private water company never made that finding public when it was hired in 2015 for a "top-down assessment" of Flint's water.

All these water crises demand full accountability. A long-term response is also needed in order to invest in sustainable infrastructure, improve regulatory oversight, and remove unjust barriers to ensure safe, clean, and affordable water access for all.

Fundamentally, we must recognize water as a universal human right, rather than a commodity reserved for the few. Whether in Jackson, Flint, Tribal lands, or beyond, the struggle for water is a shared one.