Ronald Reagan and the Ascendency of Conservatism 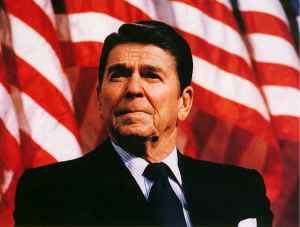 Until the votes were cast, the 1980 election was too close to call, with polls showing President Jimmy Carter leading Republican challenger Ronald Reagan. The former actor won comfortably, marking the conservative political ascendancy.

In Rendezvous with Destiny: Ronald Reagan and the Campaign That Changed America

It goes to President Obama's point: He has made the case that the '80 campaign was important, and he was right. But he's also made the case that 2008 was important, and I think the jury's out on that. Obviously, it was important because it demonstrated to the world the pluralism of America. I don't know if it was an important election in terms of being transformational. That is what is going to make 2012 absolutely a tremendously fascinating election and the nomination one of the most valuable in history.

Who would make the toughest opponent for Obama?

The one who understands what the argument is about. We're back to where we were from 1932 up until the 1970s, where we have essentially two big-government parties. We do not have a party that makes the argument that power should reside with the people and not with the national government. There's a couple of people who get it--[Newt] Gingrich understands the argument. I think [House Republican Leader John] Boehner to a certain extent understands. As far as the others, they are looking at the argument through the wrong end of the telescope.

Reagan remains the key figure in the party. Is that lip service, or has the lost its way?

has lost its way, and by that, I mean mostly the in Washington. There are certainly people who understand Reaganism: the people in the tea party movement, the people in the conservative movement, Gingrich, bloggers and columnists and writers and talk radio hosts. The irony is that the elected officials in the don't understand the argument.

You talk about how the establishment in 1980 was resistant to Reagan.

Resistant is too mild a word. They hated Reagan. Reagan was a threat. Anytime you're a threat to the established order, there's only one thing to do: You either co-opt him or destroy him. And they couldn't co-opt him, so they set out to destroy him. In many of these crossover states like Wisconsin, Reagan only won the primary because of crossover Democrats. If they had been closed primaries, he would have lost. So because he's changing the nature of the power structure of the party by bringing in culturally conservative Democrats, he is a threat. So there was a very loud whispering campaign aimed at destroying his credibility, aimed mostly at his age.

The general election was seen as close.

Carter was ahead in the polling. Though Reagan was ahead in the , he wasn't nearly close enough to the 270 he needed. Which is why he had to debate adviser Pat] Caddell begged Carter, "Don't do this, don't do this, don't do this--we have the momentum on our side." But Carter had bought into the image of Reagan as being an empty suit. He went after Reagan saying, "You can't sit across the table from the Soviets with your 3-by-5 cards and a teleprompter." I found that amusing because it's the very same thing that Republicans said about Obama.

How much of 1980 was about Reagan, and how much was a reaction to Carter?

The campaign started out about Carter but ended up about Reagan. The debate changed everything. When Reagan looked in the camera and said, "Are you better off than you were four years ago?" that crystallized it. It was a positive affirmation for many people of Reagan and not just a rejection of Jimmy Carter.

Who gave Carter's debate briefing books to the Reagan campaign?

It was Paul Corbin. Paul Corbin was a longtime Democratic, labor, Communist activist who had snuck into the country from Canada in the '30s, had been deported several times, changed his name, married his first cousin, divorced his first cousin, married another woman. He became very, very close to Robert Kennedy. So it stands to reason in 1980 he supported Teddy [Kennedy] over Carter. He had a two-step plan, which is that Teddy would run against Reagan in '84 but first you had to get Carter and Mondale out of the way, so that was by helping Ronald Reagan defeat Jimmy Carter. And Bill Casey put Corbin on the payroll--this is astonishing. But there are two important points. One is Reagan had no idea that this was going on. And No. 2 is the books themselves ... were meaningless because all they were were a compilation of Reagan's columns and speeches and public pronouncements.

What surprised you the most in writing this?

Rendezvous with Destiny: Ronald Reagan and the Campaign That Changed America

Rise Of The Vulcans: The History of Bush's War Cabinet

The Rebellion of Ronald Reagan: A History of the End of the Cold War

Ronald Reagan and the Ascendency of Conservatism | Robert Schlesinger