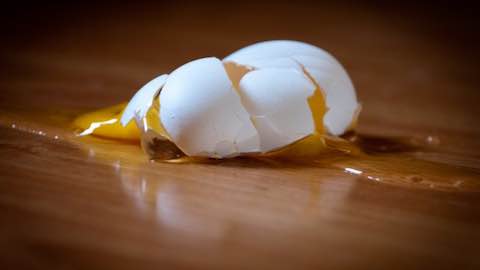 Try to relax. The bullying billionaire probably can't make it to the White House.

He needs to win a majority of all voters, not just Republicans. That will be tough when nearly two out of three of Americans already abhor him. And his bid could fracture or destroy the GOP.

Barring credible reports that he's an al-Qaeda operative or widely streamed footage of the guy having sex with multiple members of the Clinton family, Trump's bound to keep winning primaries.

He might even arrive at the Republican National Convention in Cleveland with 1,237 delegates, the usual threshold for automatically becoming the party's nominee.

Thanks to number-crunching by services like PredictWise, we know that people who bet on these things were giving Trump an 80 percent chance of winning the nomination following the high-stakes Florida and Ohio primaries. The website, which calculates political odds, was only giving him a 20 percent shot at winning the whole presidential race at that point.

That’s less than the 28 percent chance the same website says the Republican Party has of claiming victory in November. In other words -- if you ask pollsters and bookies -- far more voters would support a Republican who isn't Trump than would support Trump in all his publicity-mongering glory.

Which is why this year's Republican National Convention promises to be the most unruly gathering of its kind in decades. Someone may become the party's nominee without winning the most delegates.

John Kasich, Marco Rubio, and Ted Cruz are eager to volunteer. When right-wing radio host Hugh Hewitt asked about this prospect in a recent debate, they all said "coronate me" in the most selfless tone they could muster.

"I believe that at the end of this process this nation will make the right choice," Rubio declared.

Since GOP voters aren't coalescing around any of those three "anybody but Trump" stooges, and Rubio has exited the race, who else is there?

The leading "white horse" candidates are 2012 Republican presidential nominee Mitt Romney and House Speaker Paul Ryan, his running mate. But Romney's ill-suited for this electoral cycle’s anti-establishment vibe. And Ryan says he doesn't want the job, without ruling it out.

“I haven’t given any thought to this stuff,” Ryan told CNBC’s John Harwood. “We’ll see. Who knows.”

PredictWise gives Ryan a 1 percent chance at this point of becoming the 2016 GOP nominee. That's versus 11 percent for Cruz, 8 percent for Kasich, and zip for Romney or Rubio. The website -- which mashes together polling data, primary results, and online betting trends -- also sees Trump as likely to run as an independent as not if someone else gets the nod.

Denying the real estate developer the nomination despite an outright win or a clear first-place finish would make his raucous base rebel. The Republican party can’t count on Trump’s supporters, even if he refrains from entering the race under his own brand.

And with prominent GOP leaders still rejecting their front-runner, it's looking like this no-win situation won’t just leave Trump what he’d call a huge loser. It could ultimately shatter the party.

Will the Republican Party become the Humpty Dumpty of political institutions? If it has a great fall, all its operatives and all its handlers may not be able to put the GOP together again.