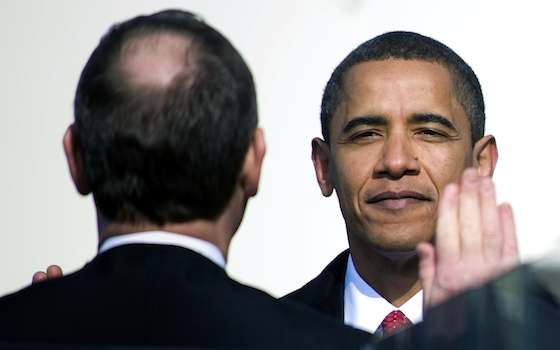 After years of mostly hedging any suggestion that racism has anything to do with President Barack Obama's ferocious opposition, there's a new racial etiquette in town. Top Democrats are slipping off the kid gloves.

"To a significant extent, the Republican base does have elements that are animated by racism," said Rep. Steve Israel, chairman of the Democratic Congressional Campaign Committee, during "State of the Union" program. "That's unfortunate."

Asked by host Candy Crowley as to whether he thought his "Republican colleagues in are racist," the New York Democrat replied, "Not all of them. No. Of course not."

"Not all of them?" Gee, Congressman, care to name names?

Israel's comment was particularly notable because it came only a few days after an even more prominent Democrat, House Minority Leader Nancy Pelosi of California, said pretty much the same thing about the position on immigration.

"I think race has something to do with the fact that they are not bringing up an immigration bill," she said at a news conference. "I've heard them say to the Irish, 'If it was you, it would be easy.' "

She didn't say who she heard talking to which "Irish," but she sounded like an old-school wheeler-dealer in the sort of ethnic-tribal politics that have produced big turnouts for generations of urban Democrats.

That's partly because she was responding to a question about Attorney General Eric Holder's earlier remarks in a speech to the Rev. Al Sharpton's National Action Network.

Without specifically mentioning race, Holder heatedly suggested that the "unwarranted, ugly and divisive adversity" that he received from Republicans during a oversight hearing a day earlier was because of, well, you know what distinguishes Obama from his predecessors, right?

Holder didn't mention race because he didn't have to. As an African-American speaking to a group that conservatives love like they love the Ebola virus, his remarks sounded like a black-oriented version of what liberals would call a racially coded "dog whistle" if it had come from right-wing whites.

What's going on? Why, after years of accusing Republicans of unfairly accusing Democrats of playing the race card, do top Democrats seem suddenly to be throwing all caution to the winds. Why? Three theories come to mind:

A lot of it is pent-up among Democrats after a half-dozen years of playing nice to help their Big Guy in the . Now it's getting near closing time for Team Obama. (Holder may even be leaving this year) and Dems feel more freedom to say what they really think.

As mid-term elections approach, what better way to rev up their liberal and heavily nonwhite base for the mid-terms than to highlight differences with conservatives over issues of racial and gender equality? A common theme connects congressional Democrats alleging racism and President Obama's promotions of pay equity and warnings about conservative rollbacks in the Voting Rights Act.

Since July 2012, Major Garrett, chief reporter, has been reporting in on "Stray Voltage," a strategy of generating controversy on purpose, simply "for the sake of milking it."

Such was the case, Garrett offers, when the claim that the median wages of working women in America are 77 percent of median wages earned by men were challenged by critics on the left and right. No problem. Under the "stray voltage" strategy, Obama's message will be remembered long after statistics are forgotten.

Indeed, the same can be said of the return of race to center stage among top Democrats, generating familiar countercharges of "race baiting" and "playing the race card" from Republicans.

Sure, those of us who care about serious issues and nuanced politics should bristle at crude appeals to racial passions by either side. But as long as it turns out votes, the politics of rage are not going away soon, color-coded or not.