Pumping Gas Prices for All They're Worth 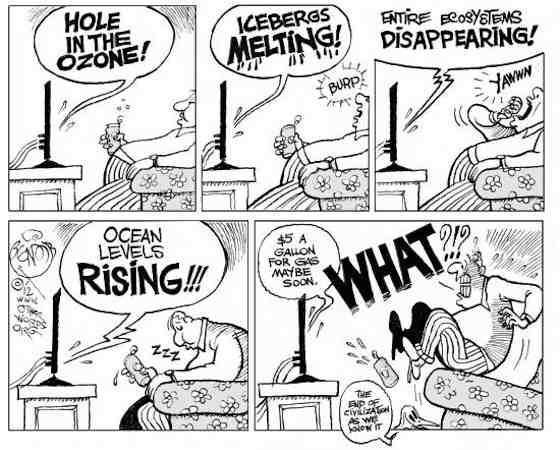 Pumping Gas Prices for All They're Worth

Oh my God. Gasoline is headed for five bucks a gallon. I read it in the newspaper, so I know it's true. The national average is already creeping up on $4, and it's bound to climb higher as the summer surge in travel approaches.

Oh the pain. The suffering. How will we survive as a nation?

You know, they talk about the courage, fortitude, and resolve of the Greatest Generation, the cohort that came of age in the 1930s and '40s and overcame great obstacles to make the United States into Fat City. And in truth they had a lot to deal with -- World War II, the Great Depression, polio epidemics, manual transmissions -- but they never had to put up with $5 gas. If they had, history might have told a very different story.

Could the Greatest Generation have pulled out of the Depression in time to conquer the Nazis, subdue the Japanese, and rebuild Europe if they'd been saddled with $5 gas? Could it have funded the GI bill or established a nationwide system of hospitals to deal specifically with military veterans and their problems? Could it have invented the computer or Instant Replay?

They'd have spent all of their time and money lining up at gas stations to buy gas at five dollars a gallon!

They wouldn't have been so great if they'd had our problems.

Fortunately, we have a slate of Republican presidential candidates angling to save us from this crisis. Why, Newt Gingrich alone has promised $2.50-per-gallon gas by next summer if he's elected. Sure, that's a big if, and he hasn't let us in on how he'll do it yet. But the common thread in Republican rescue plans is this: "Vote for me instead of Barack Obama."

Yes, surprisingly enough, Republicans have looked out on the sea of troubles that confront us and decided that it's all Obama's fault. They say he's rejected every single plan to increase our oil and gas production.

Drilling in the Arctic wilderness? Building a pipeline from Canada down through the United States? Lifting job-killing regulations aimed at preventing oil spills in the Gulf of Mexico? Obama has been against (or kind of against) them all.

He, of course, claims that the rising gas prices aren't his fault.

He says that as the recession improves, demand for oil and gas increases, driving up the price.

Why, Obama even advocates conservation. Can you believe that? The man will stop at nothing. He and the wimpy environmentalists around him want us to use less oil and gas. They go so far as to suggest we travel on buses and trains.

Well, you listen up, Mr. Obama, and you listen up good. We are Americans and we do not believe in buses and trains, which if I'm not mistaken are Communist ideas that originated in Europe.

Did the Greatest Generation have to conserve things? Not on your life. (Unless you count that gas rationing -- along with meat, butter, and eggs -- during World War II.)

We patriotic Americans think that the way to happiness is drill, frack, strip mine, and clear-cut our way back to $2.50-a-gallon gas. Oh, and we need to do what it takes to go back to buying Cokes for a nickel too.

And don't tell me about global warming, that hoax perpetrated by 10 or 20,000 climate scientists who are trying to convince us that the earth is getting warmer. Don't you know that it snowed in North Dakota just the other day?

We global warming deniers have hundreds, or maybe that's dozens, of scientists on our side saying:

- The earth isn't getting warmer.

So there. Everything is good. Or it will be as soon as we get rid of Barack Obama and his $5-a-gallon gas

Pumping Gas Prices for All They're Worth | Politics