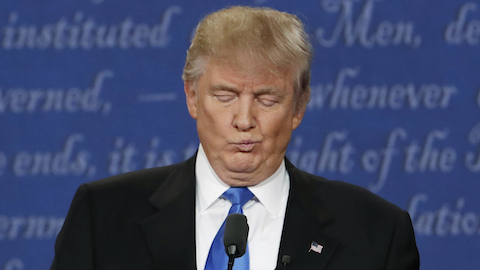 Donald Trump seemed unable to capitalize on his opportunity in front of a television audience that by some estimates may have been 100-million strong. Instead of presenting himself as a change agent, he spent most of the evening trading personal insults with his Democratic opponent, Hillary Clinton.

Running as an anti-establishment candidate, Donald Trump took the presidential debate stage to hammer home his call for sweeping political change and try to win over millions of undecided voters.

But the Republican nominee seemed unable to capitalize on his opportunity in front of a television audience that by some estimates may have been 100-million strong. Instead of presenting himself as a change agent, he spent most of the evening trading personal insults with his Democratic opponent, Hillary Clinton.

It illustrated the paradox that has plagued Trump's campaign. Polls show an electorate hungry for change, with a majority believing the country is on the wrong track. Yet Trump's brash personality and his tendency to stir up controversy have made him, at times, a poor messenger.

Trump started strongly, sticking to the bread and butter theme of his campaign - the erosion of U.S. manufacturing jobs. But he soon lost his composure, especially when Clinton questioned his success in business and his refusal to release his tax returns and accused him of racism and sexism.

When on message Trump paints a bleak picture of a United States that is victimized by China in trade, hemorrhaging jobs to Mexico and blighted by gangs of illegal immigrants roaming the streets of "warzone" inner cities committing crimes.

Robert Adams, 75, an undecided voter from Boise, Idaho, said he thought Trump's dystopian view of America was correct. "I think it's hell in the big cities," Adams said.

But after watching the debate, he viewed both the real estate magnate and Clinton as a "sad" choice for American voters and was leaning toward Libertarian candidate Gary Johnson.

Reuters/Ipsos polling shows an electorate in a downcast mood, with 64 percent of Americans believing the country is on the wrong track. That number includes 87 percent of Republicans and 44 percent of Democrats.

When Reuters asked voters to pick the first word that comes to mind when thinking about the country, the most popular choice was "frustration," followed by "fear" and "anger."

Some of Trump's strongest moments at Monday's debate were when he categorized Clinton, a former secretary of state and U.S. senator as a "typical politician," accusing her of achieving nothing in her years in Congress and government.

With an electorate yearning for change, Clinton is hamstrung by her long record and her close association with the Obama administration.

Rather than proposing wholesale political overhaul, Clinton offers up a vision of a country headed in the right direction but one that needs some changes to address income inequality and create jobs.

Her more optimistic view impressed another undecided voter, Nancy Willhite, 61, of Portland, Oregon. "She seems more in touch with reality to me," she said.

A Reuters/Ipsos poll published found that about half of all likely voters in the United States were looking to the debate to help them make a final decision.

Ron Bonjean, a Republican strategist in Washington, said Trump's performance on Monday would have left many undecided voters with questions about his ability to lead the country.

"Donald Trump has to convince them that he is going to be a safe alternative and I think it's open to debate whether he pulled that off," Bonjean said.

Christopher Devine, a political science professor at the University of Dayton in Ohio said Trump's message on Monday sometimes got lost in a welter of hyperbole that invited mocking responses from Clinton.

"He'll identify a problem people are concerned about, but in that excitement over making that point, he goes overboard and makes claims that don't hold up. It loses its effectiveness at that point."