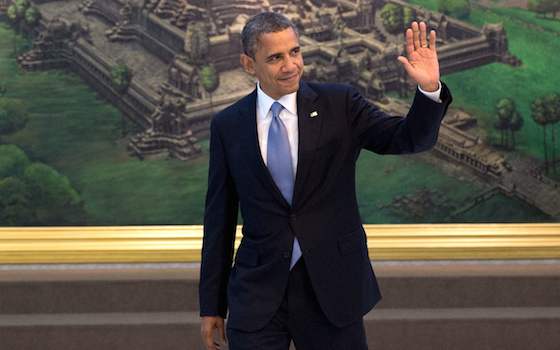 Why President Obama was off in the Asian Pacific while Russia was stirring up trouble in eastern Ukraine has caused critics to question his foreign policy priorities, not to mention his resolve. At one point he was asked what was "the guiding principle" of the Obama Doctrine.

After arguing that American relations with Asian countries "have never been stronger," the president challenged those who have outspokenly questioned, as he put it, "the failure to use military force." Indeed, he has specifically declared there is "no military solution" to the Ukraine crisis, causing some to doubt his toughness.

In an unusually detailed response, Obama alluded to the invasion of Iraq in 2003 by his predecessor in the Oval Office. "Why is it that everybody is so eager to use military force, after we've just gone through a decade of war at enormous costs to our troops and to our budget?" he asked. "And what was it exactly that these critics think would have been accomplished?"

He went on: "My job as commander in chief is to deploy military force as a last resort, and to deploy it wisely. ... Most of the foreign-policy commentators that have questioned our policies would go headlong into a bunch of military adventures that the American people had no interest in participating in and would not advance our core security interests."

Citing the civil war in Syria, Obama observed that "our interest is in helping the Syrian people, but nobody suggests that us being involved in a land war in Syria would necessarily accomplish this goal." He said material aid was being given, and to the notion that "perhaps you should have taken a strike in Syria to get chemical weapons out of Syria" (as he had threatened), he noted: "Well, it turns out we're getting chemical weapons out of Syria without having initiated a strike," though more slowly than desired.

As for Ukraine, he said, "what we have done is mobilize the international community. Russia has never been more isolated. A country that used to be clearly in its orbit is looking more and more towards Europe and the West." He noted that other nations have joined in the economic sanctions the U.S. is imposing. As for arming the Ukrainians, he asked: "Do people actually think that somehow us sending some additional arms into Ukraine could potentially deter the Russian army?"

Again he defended his more cautious approach by referring to the outcome of the invasion of Iraq. "For some reason," he said, "many who were proponents of what I considered to be a disastrous decision to go into Iraq haven't really learned the lesson of the last decade, and they keep on just playing the same note over and over again. Why? I don't know." His job, he said, was to look to what are in the American long-term security interests and "keep our military in reserve for where we absolutely need it."

Referring to the range of diplomatic and military options available to him as commander in chief, Obama said, "Where we can make a difference using all the tools we've got in the toolkit, well, we should do so. And if there are occasions where targeted, clear actions can be taken that would make a difference, then we should take them. We don't do them because somebody sitting in an office in Washington or New York thinks it would somehow look strong."

He acknowledged his approach "may not always be sexy ... but it avoids errors. You hit singles, you hit doubles; every once in a while we may be able to hit a home run. But we steadily advance the interests of the American people and our partnership with folks around world."

This recitation of how the president views the Obama Doctrine well describes what has been guiding his foreign policy ever since he decided to pivot from his predecessor's preemptive military action in Iraq. It defines the path he is determined to take during his remaining time in office, to get the country off what he calls "a perpetual wartime footing," which certainly would be a welcome achievement.