Pittsburgh's Lesson: Hatred Does Not Emerge in a Vacuum 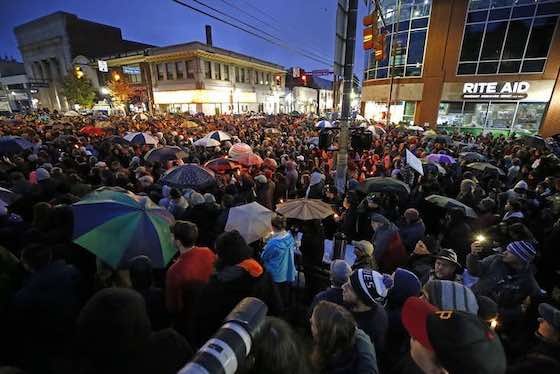 Fueled by virulent anti-Semitism, the Sabbath peace was shattered this past weekend when 11 members of the Pittsburgh Jewish community were murdered in a synagogue where they had gathered to celebrate a birth, to pray and to study.

As a scholar who studies the Jewish community and has close ties to Pittsburgh, the tragedy feels very personal. But it is not just a personal or Jewish tragedy, nor is it an issue solely for those who are part of religious communities.

As a society, we are at risk of becoming inured to a particular kind of violence -- the mass shootings and bombings that are occurring with increasing frequency.

From schools and houses of worship to restaurants and nightclubs, this kind of violence is now so frequent that it is no longer surprising. That it could happen in Squirrel Hill, the vibrant center of Pittsburgh's Jewish community and a neighborhood fully integrated with the rest of the city, is a signal that it could happen anywhere.

Getting to the root

Many explanations for American society's penchant for violence exist, but they are clearly inadequate.

Most explanations exemplify what we social psychologists call the "fundamental attribution error." They focus blame on individuals, not on the situation.

These incidents are seen as the work of psychologically disturbed individuals who can only be constrained by physical force and threats of punishment.

To be sure, those who commit heinous crimes of violence are disturbed individuals. But to overlook how our society has allowed violence to become unexceptional, and hateful ideas acceptable, is to ignore a root cause.

The murderous rampage that took place in Pittsburgh is not the first incident of violent anti-Semitism in America but appears to be the worst. For Jews, it is a painful reminder that physical violence ignited by anti-Jewish hatred -- which we thought had been eradicated in the wake of the Holocaust -- is still a threat to Jewish life.

Like a virus that mutates, contemporary anti-Semitism has assumed new forms, including efforts to equate Jewish Israelis with Nazis. But recognizable tropes resurface, in particular, lies about Jewish control of the media and economy.

What we hold in common

In the case of the Pittsburgh synagogue attack, the motivation seems to have been hatred of a Jewish-founded organization called HIAS now but which was founded as the Hebrew Immigrant Aid Society. Established in the late 19th century to help Jewish immigrants fleeing pogroms in Eastern Europe, in recent years, HIAS has turned its attention to helping immigrants from around the world.

To be sure, only a deranged individual would murder innocent Jews because of the work of a Jewish-founded organization. At the same time, we are at a moment in U.S. history when the policy debate about immigration has become ugly and divisive.

A toxic environment fueled by hate speech has emerged, where individuals and groups are blamed for our social ills. Examples include sending troops to the border to block entry of the migrants from Central America, who are called "illegals" by anti-immigrant activists and who the president says bring crime and illegal drugs and will commit sexual assault.

Emphasizing our commonality is both an American ideal and the essence of Judaism. In the aftermath of the Pittsburgh shooting, vigils attended and addressed by people of many religions were popping up in public spaces around the country, giving form to our country's original motto, "E Pluribus Unum," which translates to "out of many, one."

In Judaism, the idea that we are responsible for one another is central to how Jews are supposed to think about themselves.

This moment of grief over the lives lost, and concern for the recovery of those who were injured, should be an opportunity for us to think about how we look at one another.

It is too easy to blame other individuals and groups for the problems we experience. It is more difficult, and perhaps unnatural, to see ourselves as part of the problem. We need to create an environment where acts of violence are not accepted and hatred is not tolerated.

As a social scientist who studies the relationship among religious and ethnic groups, and issues such as anti-Semitism, it is clear that along with accepting responsibility for our fellow citizens, we need to find different ways to talk with others. There are ways to debate and elucidate rather than negate.

Nearly 2,000 years ago, there were heated discussions between two schools of thought, Hillel and Shamai, about how to interpret Jewish law. The disciples of Hillel were, for their time, liberal, and Shamai's followers, conservative.

After a heavenly intervention to resolve their disputes, it was decided that Hillel would be followed. Both positions were regarded as correct, but the followers of Hillel acknowledged Shamai, even as they came to a different conclusion.

The practitioners of current political rhetoric could take heed of this ancient lesson.

As the Pittsburgh Jewish community mourns the loss of their family members and friends, it is tempting to consider these murders as something distant. Because it appears as the rage of a misguided individual, it seems to be something Americans are near-powerless to address.

But hatred does not emerge in a vacuum, nor does violence gain acceptance absent social consensus.

Undoubtedly, Americans will need to find new ways to respond to individuals who break laws and social taboos. The larger task is to create a culture that values our differences, but recognizes our responsibility for caring for one another.

"Pittsburgh's Lesson: Hatred Does Not Emerge in a Vacuum"