Partisanship Rules at the Midterms

Partisanship is the biggest deciding factor for voters, with 17 percent of surveyed voters citing that as the make-or-break in the lead up to election day.

As the U.S. midterms approach, a survey by YouGov suggests that there is only one thing at the front of most voters' minds.

Ahead of healthcare issues, immigration and the economy, the largest share of respondents said that a candidate's political party is the most important factor in deciding who they will vote for. In what is turning out to be a vote either for or against the president, the elections are going to be a major bellwether for the first two years of Trump.

The importance for those on both sides of the partisan divide is clearly not being underestimated. 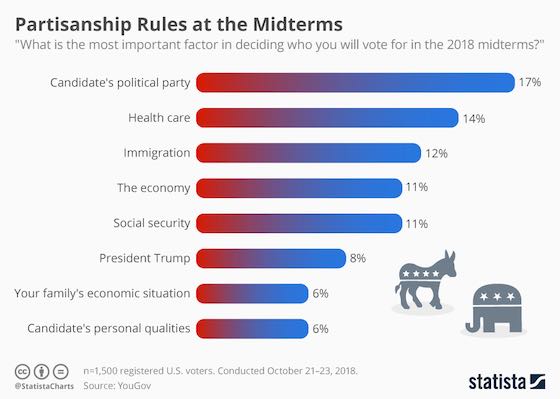 Donald Trump was again highly optimistic about the GOP's prospects in the midterms, telling reporters that the main base of the Democrats has shifted so far left that the U.S. would end up like Venezuela. The president said he expects a lot of Democrat voters to support Republican candidates in early November. Despite Trump's optimism, history is against his party. This has been the case for every sitting-president's party during the midterms since the Roosevelt era and since 1946, the party controlling the White House has lost 25 House seats on average in the midterms.

There are many reasons for the traditional poor performance from the president's party in the midterms and it doesn't always involve performance or legislative decisions. Lack of interest certainly plays a role given that supporters of the president's party are usually satisfied that their favored candidate is in the White House. Given that, they tend to turn out in lower numbers while supporters of the opposition are more energetic and motivated to head out and vote. The trend shows why the president's first 100 days is vital when it comes to pushing key legislation through. After the first midterm, the political landscape can change completely and that makes the pursuit of major legislation difficult and in many cases impossible. 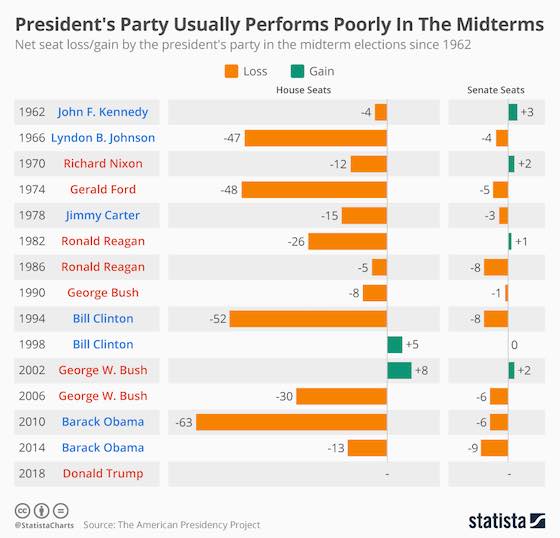 "Partisanship Rules at the Midterms"