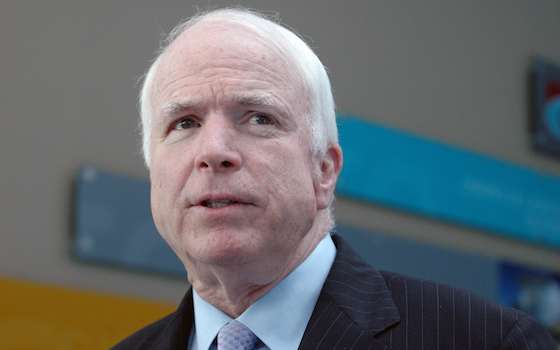 Senator John McCain, who endlessly enjoys twisting the tail of what he suggests is a paper tiger in the , has altered the old Teddy Roosevelt axiom. He accuses President Obama of talking tough but carrying a big "twig."

Thus does he lament the president's penchant for drawing red lines on adversaries' foreign-policy misconduct, followed by subsequent timidity. He cites Obama's harsh words against Syrian atrocities and lack of action against them, and his mild sanctions in response to the recent Russian interventions in Crimea and eastern Ukraine.

As Secretary of State John Kerry has persevered on the diplomatic track with a yet-to-be fulfilled Russian agreement to de-escalate the border confrontation in the eastern Ukrainian cities, Vice President Joe Biden was sent to Kiev to soothe nerves, while also warning of tougher sanctions.

Biden, his own presidential aspirations clouded by the prospect of a Hillary Clinton candidacy in 2016, soldiers on in what he has acknowledged is the best way to advance his own prospects -- by continuing to be the best vice president he can be. But being sent to Kiev on what seems a rather thankless task is hardly what one could call a presidential boost.

Biden returns to Washington as Obama has begun an Asian trip that itself does not speak of single-minded administration focus on the crisis in Ukraine. It's laudable that the president continues to address a global agenda, but his travel in another theater of American foreign policy inevitably raises questions about the intensity of his concern over the Russian behavior on the border with Ukraine.

The failure of the new Ukrainian regime in Kiev to bring sufficient military force to oust pro-Russian occupiers of government buildings in eastern Ukrainian cities has raised the specter of a civil war. The loyalties of the Ukrainian people, many speaking Russian as well as Ukrainian, have been challenged by Moscow's encouragement of pro-Russian sentiment.

Russian President Vladimir Putin's outspoken observations about obligations to Russians residing in Ukraine have generated comparisons with Hitler's demands to bring German-speaking Austrians and residents of the Czech Sudetenland into the Third Reich before World War II. But to date there seems substantial Ukrainian sentiment to remain independent since the collapse of the Soviet Union.

Obama's repeated position that there is no military solution to the crisis has invited McCain's disdain. He implies the American president has diminished the reality of U.S. power as a factor in resolving the threatening situation in Ukraine. While the government in Kiev is not a member of or the , Biden's visit is the most visible display of American support, along with pledges of further economic sanctions if the de-escalation agreement totally collapses.

But Obama's delay in imposing further economic and financial hardship on the oligarchy that rules Russia under Putin only encourages the view that the American president is an insufficiently decisive and resolute leader whose bark is worse than his bite. His almost plaintive yearning to achieve his foreign-policy objectives through diplomacy, which apparently much impressed the Nobel Peace Prize judges in 2009, only earns him the derisive taunts of McCain and other hard-line critics.

It's understandable that many war-weary Americans would question why they should be concerned whether Crimea and largely pro-Russia eastern regions of Ukraine remain under the Ukrainian flag. Obama's own desire to end America's "perpetual wartime footing," after a decade of U.S. lives and treasure being expended in Afghanistan and Iraq, has many supporters at home.

But America's longtime role as leader of collective action to secure independence and peace among nations is also at stake in Putin's brazen and calculated effort to revert to military power politics in his own backyard. Obama needs to address both aspirations with a greater appearance of toughness and clarity if he is to turn aside the barbs of critics like McCain who demand that he speak softly and carry a big stick.