Our Social Structure is Rigged 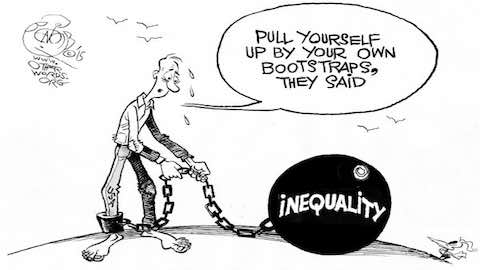 Laws and policies don't determine your entire life, but each one makes it either easier or harder to get ahead.

"It's structure vs. agency," my professor said to me, as if that cleared everything up.

It didn't. It was my first week of graduate school in sociology, and I had no idea what he was talking about.

Fast-forward three years, and I'm now teaching an into sociology class myself, trying to explain the very same point to my students.

If you live in the U.S., you're familiar with our social structure.

You need a college education to qualify for many better paying jobs. Your children can go to the local public school where you live, which is funded with your property taxes. You need health insurance, and our government doesn't provide it to everyone. If you're convicted of a felony, you can be legally discriminated against in a number of ways.

We usually assume our social structure is inevitable. It's "just how the world is." It feels natural. But it isn't.

If you look throughout American history, you'll see lots of variation and change. Racial segregation was once legal. In the 1800s, married women were banned from owning property. Same-sex marriage was, until recently, illegal. Medicare and Social Security were created in the 20th century.

Each of those changes profoundly impacts how society works. With each change, one's "life chances" are affected. The way society works doesn't predetermine your entire life for you, but it alters your opportunities. Each change makes it easier or harder for you to get ahead.

"Agency" refers to one's own ability to determine one's outcome in life.

In America, we tend to ignore social structure and focus on agency. We tell one another -- and believe ourselves -- that anyone who works hard can get ahead.

The flip side of that is that anyone who's not doing well must not be working hard. If you're poor, it's obviously your own fault.

What's more, our society is set up to help the rich stay rich, while making it difficult for the poor to become middle class or wealthy.

For example, sending poor children to poorly funded, failing schools while sending the children of wealthier parents to excellent public schools means that, upon entering adulthood, children whose only mistake was being born to poor parents are already at a disadvantage.

Can they get ahead with hard work? Sure. But they must work a lot harder just to get to the same place that the children of privileged parents can achieve easily.

If we want a country in which it's easier for anyone to get ahead by working hard, we must change our social structure.

Ignoring the role of social structure while focusing on "personal responsibility" and individual choices blames the most marginalized members of our society for their own failings.

Naturally, everyone plays some role in their own destiny. But pretending one is entirely responsible for every success or hardship in one's life is simply dishonest. Our social structure is rigged against those who are already struggling. The Republican tax bill is making it more so.

We're all playing a game that's rigged to make our lives easier or more difficult, and it's dishonest not to acknowledge that.

Politics: "Our Social Structure is Rigged"