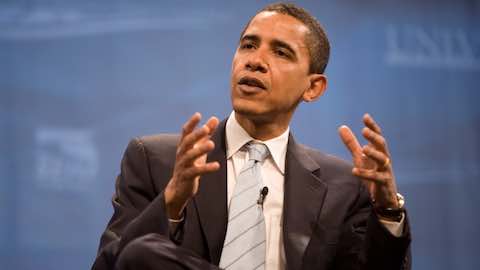 In minimizing U.S. resort to violence, President Obama has brought conflict resolution to the Oval Office.

In the eighth year of Barack Obama's presidency the struggle over assessing the correctness of his foreign policy is understandably under way. Unfortunately, too often the struggle is waged in extreme, ill-founded terms. Many Republican leaders and pundits accuse Obama of being naïve, weak, indecisive, and even at times of pursuing non-American interests and goals. Obama himself, in his unflappable manner, ignores the wildest charges and tries to explain the rationale for the foreign policy choices that he makes. His team defends and explains the grounds for choosing the least bad option in difficult circumstances. They agree on the importance of not doing "stupid stuff."

It is, however, worthwhile to seek an understanding of the foreign policy doctrine or style that Obama generally has used. Some observers, like Andrew Bacevich, think he remains essentially within the Washington foreign policy consensus in dealing with the Middle East. Yet Obama characterizes himself differently, as reported by Jeffrey Goldberg. In "The Obama Doctrine," published in The Atlantic, Obama has expressed some distance from that consensus, which he views as overly militarized. And yet he wants to characterize himself as a realist. That is probably a politically useful guise.

In fact, Obama has been quite eclectic and pragmatic in his policy making. More significantly, he has often drawn from the evolving conflict-resolution approaches. More specifically, his conduct often has been congruent with a constructive conflict approach that synthesizes the research and experience of work in the conflict resolution and peace studies fields.

Obama has tried to minimize U.S. resort to violence, while narrowing the targets and drawing upon multilateral support. In addition, he has used diplomacy to restructure conflicts and has taken into account how adversaries view a conflict so as to maximize the effectiveness of non-coercive inducements. His administration has recognized that diplomacy takes many formal and informal channels at multiple levels. Each effective engagement helps build a basis for future engagements in future conflicts. These understandings are central to a constructive conflict approach, derived from empirically grounded knowledge about ways to reduce destructive conflicts. Indeed, Obama has had notable foreign policy successes by acting in accord with a constructive conflict approach. Furthermore, some seeming failures might well have been averted, not by more militancy, but by more prompt and consistent use of constructive conflict strategies.

Importantly, in accord with the constructive conflict approach, Obama recognizes that conflicts are rarely zero-sum, whereby what one side wins is at the expense of the opposing sides. Rather, in constructively transforming conflicts it is useful to recognize that both sides can make some gains, even if not equal ones. Furthermore, Obama understands the usefulness of considering the interests and concerns of opponents and their supporters in a conflict. Even antagonism about one or more matters does not rule out finding some shared interests with particular elements in an opposing party on some other issues.

These and other considerations are applicable to Obama's fresh break from the harsh U.S. policy toward Cuba. Certainly, with the end of the Cold War, Cuba posed no direct threat to U.S. interests. The U.S. policy of a trade embargo did not isolate Cuba from good relations with other countries and allowed Cuban officials to blame economic sanctions for their own failures. The new engagement policy enhances American soft power, expanding the appeal of its values and practices. This can be expected to increase U.S. influence in the world and to be more effective in changing Cuba.

China's growing economic and military power increases its competition with the United States, and its territorial claims in the South China Sea raise tensions. But these developments need not result in military conflict. Obama's trade and investment policies enhance economic inter-dependence with China, constituting a barrier to hostilities. The U.S. administration recognizes the great complexity of interlocked conflicts in the Asia-Pacific region, which exacerbates tensions; but it also recognizes the opportunities that complexity provides for diplomatic tension reduction. Furthermore, the many confidence-building security measures and joint military exercises and exchanges can help prevent misunderstandings and accidents. Even cooperative and shared actions with mutual benefits have been achieved, as in the case of reaching agreements on countering global warming.

The nuclear agreement with Iran is another important achievement. Despite Iranian assistance in Afghanistan immediately after the 9/11 attacks, George W. Bush characterized Iran as one of the three countries constituting the Axis of Evil. In addition to threats and condemnations, some economic sanctions were imposed to force Iran to abandon its nuclear development efforts. This clearly was unsuccessful. President Obama's administration undertook a different strategy. It recognized Iran's right to develop nuclear energy for peaceful purposes, engaged with Iranian officials with civility and respect, and explored possible arrangements that might preclude Iran's attaining nuclear weapons. With the prospect of an agreement, the Obama administration was able to expand UN Security Council sanctions on Iran for failing to cooperate on earlier resolutions and its continued nuclear activities. The negotiations were consistent with the constructive conflict approach. They focused on a single element in the conflict. As in most successful negotiations, a blend of carrots and sticks proved effective.

The current destructive conflicts in Syria, Iraq, and Ukraine are outgrowths of local grievances. But those conflicts were exacerbated by overly ambitious and militant U.S. interventions for several years. Moreover, a wide range of actors did not pursue more constructive alternatives .

In short, Obama is not naïve or timorous, nor has he been unmindful of protecting American interests and values. A greater public appreciation of his thoughtfulness and of the evidence of the benefits of a constructive conflict approach would increase the chances for more creative and effective American foreign policy choices in the future.