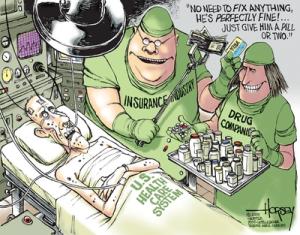 Obama & industry executives pledge to work together on healthcare reform, but it won't be easy

President Obama stood at a podium flanked by six healthcare leaders and announced what he called "a watershed event in the long and elusive quest for healthcare reform."

As he spoke, some of the men nodded in agreement; others, looking straight ahead, were almost expressionless.

When Obama finished, he exited to his right, and the six men followed, pausing for a moment to let the president go ahead. This being a photo op, it was hard not to see the symbolism.

Obama, by almost any account, had just scored what appeared to be a major concession from several of the country's biggest healthcare players, who pledged to cut the growth of healthcare costs by $2 trillion over the next 10 years. Better yet, Obama said, the pledge "will help us take the next and most important step: comprehensive healthcare reform."

As it turned out, Monday was just the first day of a weeklong push on that front.

Last Tuesday, Obama met with business leaders to hear ideas on lowering healthcare costs. The following day, he summoned House Democrats to the White House for something of a strategy powwow, which ended with a smiling Speaker Nancy Pelosi promising to have a healthcare bill on the House floor by the end of July.

And yet it was Monday's event that was by far the most intriguing sign of what may, or may not, happen with healthcare reform in the coming months.

When the Clinton administration's health reform effort famously sank, it was broadly assailed by insurers, pharmaceutical companies, hospitals, and many others. Last week, however, many of those interests stood with (or behind) Obama and, this time, pledged cooperation. Not surprisingly, suspicions remain, and over the past week there has been ample debate not just about the industry's often inscrutable motivations but also about what this strange new alliance might mean for prospects for actual reform.

On one hand, experts say, there are reasons to be wary.

The commitment from healthcare leaders was vague, voluntary, and limited in scope. It focused only on lowering costs and said nothing about Obama's call for a government-sponsored insurance plan. In addition, there's a well-documented precedent for the industry to show initial interest in negotiating before backing out once it sees details it doesn't like. (In fact, last Thursday, just three days after the "historic" White House announcement, the CEO of pharmaceutical company Eli Lilly reportedly gave a speech in which he criticized elements of Obama's healthcare plan.)

On the other hand, experts say, the parallels to the Clinton healthcare debacle extend only so far, and there are signs this year is different.

"This was a huge political barometer," says James Morone, a political science professor at Brown University and healthcare policy expert. "All those interest groups basically had to make a very significant decision: fight or cut a deal. The fact that they all sat down and said 'cut a deal' is a barometer of what's going on in Washington, because they think the mood in Washington right now is very conducive to healthcare reform."

At least two lines of reasoning support that point.

Last month, thanks to some skillful language inserted into Congress's approval of the president's budget, Democrats succeeded in stripping Republicans of their most valuable weapon against healthcare legislation in the Senate: the filibuster.

Now, rather than needing 60 votes to advance legislation, Democrats will need only 51. Meantime, Congress and the administration are moving remarkably quickly to craft a bill, much to their benefit. When then President Clinton and first lady Hillary Clinton tried their hand at reform, it wasn't until September 1993 that they unveiled a plan, by which point the president was bogged down by other matters.

In this year's go, House Democrats hope to have a bill cobbled together by the summer.

"Obama gets the importance of speed," Morone says. "Clinton didn't realize that after about nine months, his election was going to lose its luster."

Central to any successful effort, however, will be the support of the insurance companies, medical device manufacturers, pharmaceutical companies, and other medical groups.

Despite the gem of promise contained in Monday's event, history tempers optimism.

Some of the same language heard today was used as early as January 1993. Healthcare leaders wanted "a seat at the negotiating table." The American Medical Association was promising "a new partnership" with lawmakers. Another group, the Health Insurance Association of America, though long opposed to health reform, actually put out its own reform plan, noting that "we know change is coming, and we better participate in designing that future."

Within months, however, as details emerged about the Clinton administration's actual plan, these pledges of cooperation all but dissolved.

That September, the HIAA famously put out the "Harry and Louise" video, which featured a middle-aged couple seated at a dinner table and fretting over the idea of "healthcare designed by bureaucrats."

And so it is details that will matter greatly and will be closely watched in the next few months.

As David Orentlicher, codirector of Indiana University's Center for Law and Health, says, what was agreed upon this week was mostly general and relatively uncontroversial principles. "It would be hard for stakeholders not to support something like that," says Orentlicher. "But as we get into some of those specifics about how to really hold down costs, you are going to have to ask for some substantial sacrifices."

Among the sticking points: how to cut spending (now estimated at more than $2.2 trillion annually, more than 16 percent of the country's GDP), how to expand coverage to the uninsured, and how to pay for everything.

On Monday, Obama reiterated his pledge that "all Americans must have quality, affordable healthcare," but he largely skirted the uncomfortable fact that his support for a government-sponsored health plan is not well tolerated by many of the healthcare executives who were standing behind him.

To complicate matters further, on Tuesday, the administration announced that the recession had so sapped Medicare that it's now expected to run out of money by 2017, two years earlier than expected.

If nothing else, Monday's announcement, staged as it was at a national news conference and, at least for a day, featured as a dominant news story, serves as something of a prodding rod for the administration.

"The fact that these groups didn't just say this in the backrooms, the fact that this was a televised public statement, means that if they don't come through, it's going to hurt them," says Morone.

In other words, if they back off, a lot of people in Washington won't look too kindly upon them in the future.