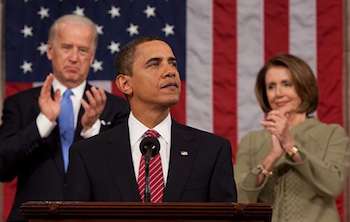 In his State of the Union address, Obama laid out his proposals for creating jobs

President Obama promised to make creating jobs and strengthening the economy his top priorities in 2010. In his 71-minute State of the Union address, a mostly somber but confident Obama argued that "again, we are tested, and again, we must answer history's call."

Upon taking office a year ago, the president said, he faced a staggering series of crises, including an economic meltdown, rising unemployment, and two wars. He outlined a daunting list of remaining problems and returned to his 2008 campaign summons to end the hyperpolarization in Washington by reminding that Americans are "tired of the partisanship, and the shouting, and the pettiness." He sternly told the assembled legislators that many voters wonder whether a divided Washington is capable of solving the nation's problems.

But he said the "great decency and great strength" of everyday Americans make him more hopeful than ever about the future. "We do not give up," the president said. "We do not quit. We don't allow fear or division to break our spirit. In this new decade, it's time the American people get a government that matches their decency, that embodies their strength."

In the official Republican response, Bob McDonnell, the newly inaugurated governor of Virginia, criticized the Obama administration and majority Democrats in for spending too much and for building up the power of the federal government. "Many Americans are concerned about this administration's efforts to exert greater control over car companies, banks, energy, and healthcare," McDonnell said at the state Capitol in Richmond. "Overregulating employers won't create more employment; overtaxing investors won't foster more investment. Top-down, one-size-fits-all decision making should not replace the personal choices of free people in a free market nor undermine the proper role of state and local governments in our system of federalism. As our founders flatly stated and we governors understand, government closest to the people governs best."

Obama admitted that he has suffered some setbacks in the past year and that some of them were "deserved." He also conceded that many Americans don't think he is delivering on his promise of change, but he said he would keep trying to improve the way Washington works and to reach some complex, difficult objectives left over from 2009, just as everyday Americans keep pursuing their own goals despite adversity.

Obama didn't come up with a new framework for his presidency or a fresh, unifying vision, which many of his supporters had favored as a way to boost his job-approval ratings and restore confidence in his administration. Instead, he announced a series of initiatives, some new and others that had been previously announced, in an effort to put himself on the side of change and bill himself as a tribune of everyday people.

The president spent much of his speech defending his record of the past year, arguing that his economic recovery plan has created or saved numerous jobs and helped the economy grow again after two years of recession. He promised that job creation would be his top goal in 2010 and called for a "new jobs bill" to be passed by . But Obama noted that 7 million jobs have been lost over the past two years and that it will take considerable time to restore them and create more.

-Taking the that Wall Street banks have repaid the government for the earlier financial "rescue" and using it to help small businesses.

-Enacting a package of tax incentives for small businesses.

-Creating jobs by rebuilding the nation's infrastructure, such as roads, bridges, and sewers.

He repeated a proposal from earlier this week to freeze most discretionary domestic spending for three years. And he said he would issue an executive order creating a bipartisan fiscal commission to recommend ways of reducing the deficit. The rejected a measure to set up such a panel earlier this week, so the president decided to move ahead unilaterally.

Regarding energy, Obama called for a new generation of "safe, clean nuclear power plants" in the United States, some carefully planned offshore oil and gas development, continued investment in biofuels and clean-coal technologies, and legislation to limit climate change.

He pledged to continue working to overhaul the healthcare system but didn't clarify how to break the logjam that has stalled compromise in . He said he accepts a share of the blame for not explaining what an overhaul would do and for leaving many Americans confused and worried about the pending legislation. He said many Americans desperately need reform in order to gain adequate coverage, eliminate abusive practices by health insurers, and hold down healthcare costs. "I will not walk away from these Americans," he told an assembled joint session of in the , "and neither should the people in this chamber."

He also supported a program to increase U.S. exports and open global markets to U.S. goods, and a plan to increase funding for education. And he called for ending the military's "don't ask, don't tell" policy regarding homosexuality in the armed forces in order to allow gay people to serve openly in the military.

He called on members of to post all earmark requests on a single website before the legislators vote, to inform the voters of "how their money is being spent."

Toward the end of his address, he repeated his plan to end the Iraq war and called for a continued effort to fight terrorism. But clearly, strengthening the domestic economy is Obama's Job 1.