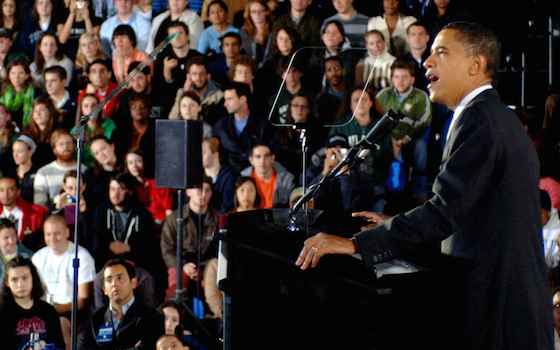 President Obama was doing his favorite thing this week: talking to crowds of adoring young people who already agree with him while acting like he persuaded them about something.

They also seemed to give Obama the impression that he's a really funny guy. On Wednesday, he told a crowd of 1,400 at the that he visited a local deli, Zingerman's. He proceeded to tell a long story about ordering the small Reuben sandwich, which he said was "killer." That description got a good laugh. Then he explained how he thought the sandwich was too big, so he shared it with his advisor, Valerie Jarrett.

"Took the pickle" was a huge laugh line.

Pickle is a funny word, but still; when an audience thinks this is a knee-slapper, you know it's not a rough crowd.

But Obama had a serious point to make as well. Zingerman's "is a business that treats its workers well and rewards honest work with honest wages. And that's what I'm here to talk about today." He then segued into a pitch for raising the minimum wage.

Andrew Johnson noted that Zingerman's is pretty expensive. That small Reuben cost -- pickle included! (Thank you! I'm here all week. Please tip your servers.) The large goes for nearly . The irony might have been lost on the president that Zingerman's "honest wages" also lead to high prices.

Using Zingerman's as his comedic muse, the president transformed into Zinger-Man. According to the , Obama hurled "a series of zingers to draw a contrast with Republicans on the economy in an election year."

Breaking slightly from the standard talking point that the is out of ideas, Obama said, "Now, to give them credit, they do have one original idea, which is to repeal Obamacare."

He then turned to Rep. Paul Ryan's budget proposal: "If they tried to sell this sandwich at Zingerman's, they'd have to call it the Stinkburger, or the Meanwich."

Not since the First Barbary War, when Thomas Jefferson proclaimed, "I see London, I see France, I see John Adams' underpants" has a president so successfully combined deep wit with biting criticism of a political opponent. (Yes, that was a joke, in case the absence of the word "pickle" threw you off.)

It should go without saying that an audience that thinks this is A-grade material will think Obama's "zingers" hit the mark. The problem, for both Obama and his audience alike, is that the president is utterly incapable of arguing with anything other than a fictional opponent. In 2012, he had to turn Mitt Romney into a cancer-causing extremist who wants to declare war on binders full of women.

Now, the focused-grouped line is that the is "the party of no," has "no agenda" and only wants to repeal Obamacare. Meanwhile, the president loves to say he's open to good ideas from anybody, including Republicans. But, alas, the refuses to offer any. Last summer, Obama announced that if the Republicans "had some better ideas" on health care, he was "happy to hear them. But I haven't heard any so far."

In reality, the supposedly agenda-less Republican-controlled House has passed more than 40 bills, all of which have gone on to die in the Democrat-controlled (while Obama himself has unilaterally repealed vast swaths of his own law). In recent years, the has offered no less than five comprehensive health care reform proposals. Some honest liberals, like Jonathan Cohn, concede that "Republicans do have plenty of ideas." But, they won't achieve "universal coverage, at least in the way most people understand it."

Never mind that Obamacare fails that same test. When the president pitched the Affordable Care Act in 2009, there were roughly 30 million uninsured. The Congressional Budget Office projects that in 10 years there will be ... roughly 30 million uninsured under Obamacare. According to Gallup, more people are uninsured today than when Obama took office. Indeed, most of the alleged 7 million "enrollees" in Obamacare are people who lost their health insurance because of Obamacare.

Perhaps the biggest irony is that the young people Obama had in stitches are being forced to pay too much for health insurance in order to subsidize health care for others. In other words, they're laughing at the pickle, but the joke is really on them.