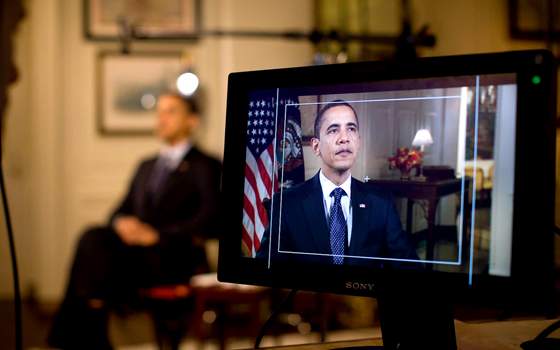 President Obama faces a growing impression, fanned to be sure by his Republican critics, that he somehow has become irrelevant, especially in the wake of the Obamacare rollout fiasco.

The president was forced into a defensive crouch over that bureaucratic disaster. He not only had to do all he could to unravel the mess; he also had to acknowledge that he had misled the public in saying Americans could keep the health-care insurance they had if they wanted to.

Now he is attempting to pivot public attention to the more defensible issue of income inequality, and its most obvious and immediate partial remedies -- extending the long-term unemployment benefits that were cut off on January 1 and raising the federal minimum wage.

On the proposed minimum wage boost, from an hour to , Obama has strong public backing as cited in public-opinion polling. It also figures to be his best political edge in light of the traditional support from lower-income voters. Yet his own sharp drop in public approval as president augurs difficult months ahead in whatever objectives he pursues to reset his political relevance.

The task may seem monumental in light of the Obamacare albatross. But the possibility remains that once the registration process gets rolling at top speed, and new health-care recipients experience the benefits of the law, much of the public confusion and disapproval will be dispelled. Eliminating the barrier of pre-existing conditions to insurance coverage, along with extended youth dependent coverage, should help Obama get over the hump.

The president can also take some solace in the fact that the previous Democrat in the , Bill Clinton, managed to climb out of a similarly imposing hole near the end of his first term. Then, the slumping Clinton felt obliged to declare publicly he was still a player in dealing with the nation's domestic ills.

In a late 1995 news conference, a reporter suggested Clinton had diminished clout in coping with a calling his bluff over a government shutdown. Clinton insisted "the president is relevant here." He went on to cast Gingrich as the Grinch who stole the Christmas season, forcing him to back down, and the president went on to easy re-election in 1996.

Obama had already been re-elected when the Obamacare calamity occurred, but he is still laboring with the Republican majority in the House that brought him much grief in his first term. The Democratic prospects of gaining control there, and maintaining the party's narrow majority in the in next November's congressional elections, appear damaged in the wake of the health-care mayhem.

With a lame-duck president in the Oval Office, the opposition-party wolves remain at Obama's door, despite the recent modest bipartisan budget compromise led by former vice-presidential nominee Paul Ryan and Democratic Sen. Patty Murray. Republican control of both houses of in the fall would further challenge any Obama declaration of relevance over the final two years of his presidency.

For this reason, the incumbent president cannot afford to slough off the continued coolness of his own party's liberal wing, now frequently relabeled as progressive, if he hopes to re-energize his administration's political power. In seizing on income inequality and the fight for increasing the minimum wage as cornerstones of his new year's focus on the plight of the middle class, he may have his best means to confirm his relevance as the exit door of the two-term limit beckons.

As Republican presidential hopefuls for 2016 jockey for position, they will be hard-pressed to buck Obama's push for the higher minimum wage. One obvious reason is their need to address their party's weakness among women, African-American and Hispanic voters, as demonstrated by the Romney candidacy in 2012. All these voting blocs are particular victims of income inequality, ratifying the Democratic political strategy for the new year and beyond.