Obama's Presidency by the Numbers 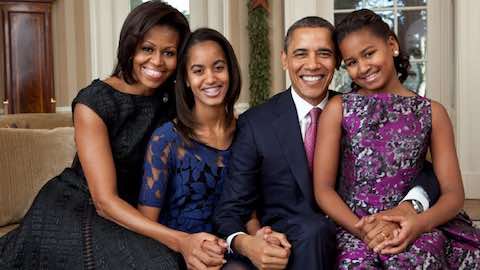 Official portrait by Pete Souza of the Obama family in the Oval Office.

Now that his time as President is coming to a close, we thought we'd look back at Obama's presidency in our favorite format: visualized.

After eight years, President Obama's time in office is coming to a close. From self-identifying as a feminist, to pushing through the divisive Affordable Care Act, to appointing two women to SCOTUS who helped to make same sex marriage a nationwide right, this two-term President has been integral in making many changes for the nation.

Now that his time as President is coming to a close, we thought we'd look back at his presidency in our favorite format: visualized.

During his time as president, Barack Obama appointed two women to The Supreme Court of the United States. During his nomination of Sonia Sotomayor, the first Hispanic Supreme Court justice, Obama was quoted saying:

"And when Sonia Sotomayor ascends those marble steps to assume her seat on the highest court of the land, America will have taken another important step towards realizing the ideal that is etched above its entrance: Equal justice under the law."  --  The White House, Office of the Press Secretary

Perhaps the best job in the United States is the coveted position of first dog. Two very lucky Portuguese Water Dogs named Bo and Sunny joined the Obama family in the White House and are likely best friends, though they could be bitter rivals. Perhaps indignant about having to leave her home, Sunny bit an 18-year-old who tried to pet her while visiting the White House this week.

What will Obama be remembered for?

According to a poll from the Pew Research Center, Barack Obama will be most remembered for the Affordable Care Act.

Poll: What Will President Obama Be Remembered For?

The Affordable Care Act has decreased the number of U.S. citizens without insurance coverage but has also largely increased the cost of health insurance for many Americans.

Uninsured Rate by Age Group in the United States

Federal Debt on the Rise

When Obama took office, the federal debt stood at 11.8 trillion, and rose to over 17 trillion in 2016. This increase brings the U.S. Federal debt-to-GDP ratio to greater than 100% for the first time since 1947.

A Friend to the Environment

Under the Obama Administration, the U.S. increased its reliance on renewables and natural gas as energy sources, while decreasing coal use. The president has spoken on countless occasions regarding his attitude about the environment and climate change:

"So the question is not whether we need to act. The overwhelming judgment of science  --  of chemistry and physics and millions of measurements  --  has put all that to rest. Ninety-seven percent of scientists, including, by the way, some who originally disputed the data, have now put that to rest. They've acknowledged the planet is warming and human activity is contributing to it." -- The White House, Office of the Press Secretary

Throughout his presidency, Barack Obama repeatedly spoke out against the all-too-common mass shootings that have occurred in the United States and continually advocated for stricter gun restrictions. During his time in office, there were 33 mass shootings in the U.S.

"The one thing we do know is that we have a pattern now of mass shootings in this country that has no parallel anywhere else in the world. And there are some steps we could take not to eliminate every one of these mass shootings, but to improve the odds that they don't happen as frequently: common-sense gun safety laws, stronger background checks."  --  USA Today

Mass Shootings During the Obama Administration

Many of us have seen countless memes alluding to the friendship between the president and vice president. On January 12, 2017, Barack made their BFF status official by awarding Biden the Presidential Medal of Freedom.

President Obama has granted commutations to more than 1,100 prisoners during his time in office and has pardoned close to 150.

On January 20th, 2017, Barack Obama will leave office and Donald Trump will be sworn in as President of the United States. Details of the inauguration schedule included in the visualization below.

Politics: "Obama's Presidency by the Numbers"