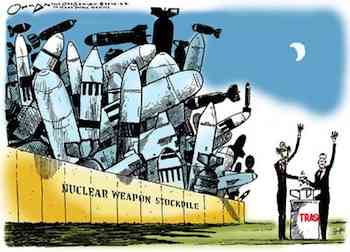 Nuclear strategy can be as vague as it is dangerous. The good news is that the new Obama Doctrine turns out to be a lot vaguer than first, unreliable reports indicated. The administration may talk of restricting the use of nuclear weapons to those cases in which nukes are used against us, but it has left a loophole in its Nuclear Posture Review large enough to launch a nuclear-tipped missile through.

For example, the president specifically exempted rogue states like North Korea -- and, soon enough, nuclear-armed Iran -- from any assurance that they would enjoy immunity against nuclear retaliation should they attack this country or our allies, whom this president has made nervous enough already.

This new policy paper, it's reported, has been in the works for months and months, and is the product of some 150 meetings, including 30 initiated by the president's own . That doesn't count the rewrites he himself has a tendency to throw in. So you can imagine, after that many cooks, how murky this broth is. Which is a comfort. Our strategic doctrine should not be too clear, certainly not to our enemies.

Strategic ambiguity has its uses. Those who think about making war on the West should know that there's no telling how those cowboys in Washington would react. Why give potential aggressors a step-by-step guide to our responses?

In the end, instead of declaring that the "sole role" of America's nuclear arsenal would be to deter nuclear attack, the final version of the policy paper refers to the "fundamental" role of nuclear weapons in our defense. Which leaves open the possibility of using relying on it in general.

Surely more refinements, ad-lib responses to unpredictable circumstances, quiet warnings and loud posturings are yet to come in the months and years ahead. It's that kind of world.

Rest assured, any administration that includes Joe Biden is not going to be short of snap reactions. He could yet come in handy just to confuse matters. For the first principle in the tricky and all-important game of nuclear deterrence is never to tip your hand. Fear is a good thing -- on the part of potential aggressors. Those who would defend freedom must summon another quality: courage.

Some of the president's comments are nevertheless troubling, as if he had attended too many Ban the Bomb rallies in his youth, unaware that banning this country's nuclear weapons would be the surest way to invite a nuclear attack. Nuclear war won't be deterred by holding hands with our enemies and singing Kumbaya. There's a reason world wars ended after the atomic bomb was introduced. The object lesson of Hiroshima, and then Nagasaki, was a more powerful deterrent to nuclear war than any abstract theory of nuclear war.

Barack Obama assures us that his fine gradations of strategic deterrence will be enough to deter an attack by less-than-nuclear but perhaps just as destructive biological or chemical weapons. Or maybe even cyber-attacks in this computerized, internetted and generally global-villaged age. So he's going to rely on "a series of graded options" instead of leaving the nuclear one so open. It's an old theory, that of graded responses. We've seen how well graduated escalation has worked in the past, as in Korea and Vietnam. Namely, not very well. Those are examples to beware, not emulate.

As far back as the 1950s, a promising student of nuclear deterrence named Henry Kissinger was explaining in an influential tome "Nuclear Weapons and Foreign Policy" how nukes could fit atop a scale of "flexible responses" to emerging threats. It was an early version of what Barack Obama now calls "graded options," but the principle is the same.

Nuclear weapons were to be considered just one more if final option. Instead of being used to back up a threat of "massive retaliation" if this country were attacked using even conventional weaponry. But for such a deterrent to be convincing, so must the commander-in-chief's willingness to use it. And when Barack Obama backs away from nuclear weapons, he undermines their power to deter.

It's happened before, this conflict between the theorists and those who've actually commanded armies in war. Like Dwight Eisenhower, who when told about the flexible-response theory of how to avoid a nuclear war, snapped that he wasn't interested in waging "a nice, sweet World War II type of war." He was out to secure the peace, not fight a limited war that, in the end, might not prove limited. The best way to prevent total war, he figured, was to plan for it, and let any potential enemy know we were planning for it.

At about the same time, Winston Churchill was saying much the same thing to the . "The new terror," he said, "brings a certain element of equality in annihilation. Strange as it may seem, it is to the universality of potential destruction that I think we may look with hope and even confidence." It was a confidence that has been borne out. At least till now.

But the prospect of universal destruction will deter only if it is convincing. If a potential aggressor is assured he will be spared nuclear retaliation should he employ "only" biological or chemical weapons, then the incentive to use them will increase.

The old concept of a balance of power, as Churchill pointed out in his Iron Curtain speech just after the dawn of the atomic age, is no longer sound. For the strategic objective must be to amass such an aggregation of power on the side of peace and stability, including nuclear power, that it will deter the forces of aggression. Peace through strength, in short. For that kind of deterrence to be convincing, strategic ambiguity must be preserved, not lessened.

There is nothing wrong with talking about America's nuclear forces -- so long as nothing very specific is said about how they would or would not be employed. Let aggressors have to guess. There's a reason for that old Irish toast, "Confusion to our enemies!"

Dwight Eisenhower, whose language or attempts at it were the butt of so many jokes among the intellectuals of his time, had a way of so thoroughly confusing the issues that nobody could have a clear reason to go to war over them. He was a master of that tactic, as he illustrated at almost every presidential press conference. If reporters were left scratching their heads, so were our adversaries. When it came to statesmanlike incoherence, the man was a natural.

Barack Obama, on the other hand, may find that he has been dangerously coherent. He shouldn't be signaling his every move in this highest of high-stakes games.

A favorite Eisenhower story: During one of those recurrent crises in the Strait of Taiwan back in the 1950s over the offshore islands of Quemoy and Matsu, the president's press secretary, James Hagerty, was a nervous wreck. He was worried his boss would say something so conciliatory that the Communists on the mainland would take it as an invitation to seize the islands -- or, conversely, something so provocative we'd find ourselves in World War III.

No problem. Ike took his press secretary aside and assured him, "Don't worry, Jim, I'll go out there and confuse 'em." Which he did. At length. The fighting dribbled out, peace was preserved. The old general proved inarticulate like a fox. Maybe what Barack Obama needs to do is learn how to issue policy statements freighted with insignificance.