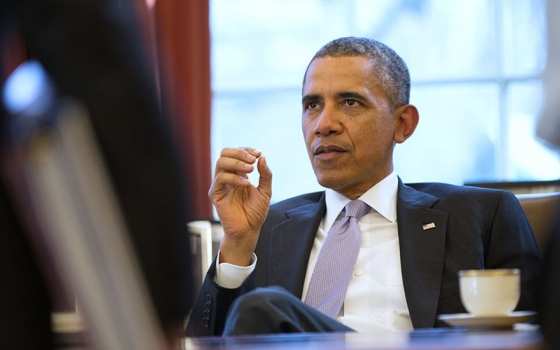 Russian President Vladimir Putin's land grab of Crimea, with more threatened to come, has Republican neoconservatives eagerly lining up to denounce President Obama as a deplorably weak leader who settled for throwing snowballs at Putin rather than military muscle.

Former Sen. Rick Santorum of Pennsylvania, laboring to keep his presidential aspirations flickering after a brief day in the sun in the 2012 Republican primaries, has temporarily doffed his anti-abortion hat to get in front of the parade.

In an interview in Politico, Santorum puffed that "it's about time we started getting tough with the Russians, standing by our allies, and not tolerating this type of outrageous aggression on the part of Putin and the Russian government. ... Weakness creates a vacuum, and Putin has filled that vacuum. "

Santorum rightly noted that Ukraine agreed when it gained independence to turn over to Russia the nuclear weapons remaining on its soil from the Soviet Cold War arsenal. "In exchange for that," he went on, "we said would defend their territorial integrity. If the president wants to have nuclear disarmament, he can't then renege on people who actually disarmed."

It's a justifiable point, to be sure. But it doesn't square with the reality that the new regime in Ukraine is hardly in a position to reverse the grab of Crimea, nor even has the will. It can be argued Obama is governed not by personal weakness, but rather by his determination to pivot U.S. foreign policy away from military confrontation as an acceptable option to other means of crisis solving.

He is in fact "standing by our allies" of the in leading them in the imposition of economic and financial sanctions against Russia and Putin's business "cronies," as Obama has dubbed them. The neocons are not alone in calling for Obama to invoke much tougher sanctions, and more quickly. But breast-beating about resorting to force flies in the face of overwhelming American public opinion after more than a decade of botched or inconclusive U.S. interventions abroad.

There's a strong strain of thinking among neoconservatives that the demise of the Soviet Union ushered in era of American military superiority that must at all cost be maintained and unchallengeable, with the noble goal of creating a "Pax Americana." But while the threat of mutual assured destruction in the nuclear age has averted any nuclear exchange for 70 years, it hasn't prevented a myriad of local non-nuclear wars.

In the latest crisis, with Russian ethnics in Crimea opting for annexation by Moscow, many Americans can well be persuaded that what's going on is none of their business. Or at least that it's not reason enough to spend more American treasure, as has been done in Iraq for more than a decade now.

Obama not only is proceeding with due diligence in leading the Western powers in imposing the sanctions against Moscow. He also is hewing to his policy, in the wake of the American invasion of Iraq, of trying to end what he has called America's "permanent wartime footing," by resorting more on the tools of diplomacy -- admittedly with only mixed positive results.

It needs to be remembered now what little role foreign policy played in Obama's re-election in 2012. By then the end of the Cold War seemed to have taken root, and Obama was focused on his objective of achieving a "reset" of relations with Russia. That prospect seems imperiled if not doomed now. The challenge instead has become how to avert a resumption of that Cold War and a return of its constant anxieties over military confrontations.

The Republican neoconservatives may well hope that continuing to cast Obama as a weakling in the will enhance their steadfast resolution to render his presidency an unproductive eight-year wasteland. But clearer heads in both parties will recognize that supporting him at home, as a steady hand in the current international uneasiness, is in the national interest right now.