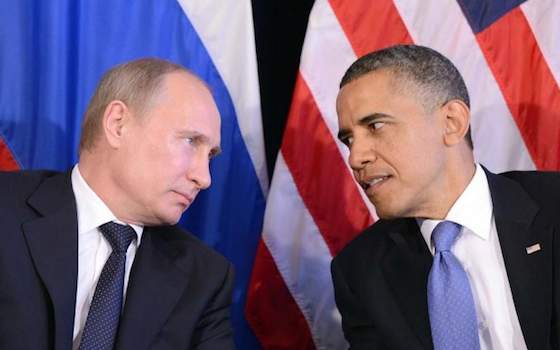 As he seeks to rebuild the Russian empire, strongman Vladimir Putin has developed a terribly obnoxious habit.

He keeps dragging the Obama White House back to a difficult place.

Putin's military capture of Crimea, a region of Ukraine, is just the latest example. His could be an act of willfulness, or a desperate attempt to stave off Russian decline. But in any case, no sane American would argue for a shooting war over Ukraine. The point is to avoid miscalculations that could lead to one.

It's like that phone call at 3 a.m. to a run by an inexperienced leader, that call Hillary Clinton warned America about years ago.

Her devastating 2008 campaign spot of that ringing phone, arguing that Barack Obama was not ready for the call, was profound. And it was profoundly forgotten.

It faded away as America was captured instead by his soaring rhetoric and the messianic politics orchestrated by Obama's mythmakers.

Clinton's campaign was gutted by Obama's expert and cynical use of the race card. arithmetic made it impossible to win without African-American voters. And she lost them when he said hello.

As Clinton receded, wounded, humiliated by the devastating label of racial insensitivity, the American media grew bored with her. But journalists found a new hobby: placing laurel wreaths upon the head of Mr. Obama.

Vesting a nation's leader with unearned virtues isn't particularly American. The same goes on in the Russian media.

But good intelligence services are not run by sentimentalists. These are people of cold mind.

And somewhere in the Kremlin, there must be a dossier on Obama, something a bit more comprehensive than media gushing about his use of symbolism.

What would such a Russian dossier tell Putin about the nature of the man?

It would tell Putin that Obama rose on the wings of an America tired of war.

And that Obama flew skyward, preaching about ethics, and promising hope and change we could believe in, all of it orchestrated brilliantly by David Axelrod, who doubled as the mouthpiece of Chicago's supremely cynical political boss, then-Mayor Richard M. Daley.

Putin already knew that Obama had absolutely no executive experience before taking the most important executive job in the world. And that he charmed his way into the job. America, tired of war and fearful of a collapsing economy, reached for the president from Chicago in the way a drowning man reaches for a chunk of floating wood.

But the Obama dossier would mention what many here have ignored about the president's formative years: Obama challenged power only once.

And when he did so, U.S. Rep. Bobby Rush branded him as not black enough for the South Side. It was a lesson Obama never forgot.

From then on, Obama didn't challenge power. He accommodated it.

He got down on his knees before it, asking President Emil Jones to make him a United States senator.

And so Obama climbed out of Chicago.

Young, risk-averse people who teach themselves never to challenge power can and do succeed. They can prosper in an America that has reshaped itself as a kind of modern Byzantium.

They do well in corporate and political life. They punch their tickets. They make their connections. They gather support among like-minded bureaucrats and clerks, as the Byzantines once did.

They rise. They prosper.

But they don't grow up to be William Wallace.

Instead, they become older men who can always find practical reasons for acquiescing.

That kind of man can turn his back on Poland, after that nation agreed to a U.S.-backed missile defense shield, and feign shock that Russia would see an opening.

Though Obama was a gentle stalk of asparagus when it came to Chicago's City Hall, he has shown flashes of backbone as president.

For example, during a tough re-election campaign, he fended off calls by Israel to support a military strike against a nuclear Iran that had threatened to obliterate Israel. His resolve was vastly underrated.

He's withdrawn our troops from Iraq. He's getting us out of Afghanistan, too. And he gave that order to take out Osama bin Laden.

But it's his desire to avoid confrontation that must whet Putin's appetite.

Like at the famous 2012 photo-op in Seoul with Putin's acolyte, Dmitry Medvedev. On a hot microphone, Obama asked Medvedev for time on missile defense issues until he put his own politics in order.

"This is my last election ...," Obama was overheard to say. "After my election I have more flexibility."

"I will transmit this information to Vladimir," said Medvedev.

Imagine Putin smirking at Obama being so eager to make friends.

"Gov. Romney ... the 1980s are now calling to ask for their foreign policy back," Obama said. "Because the Cold War has been over for 20 years."

It was a snarky bite, like a Twitterverse rendition of complicated and dangerous history.

President Obama, the '80s aren't alone in calling for their foreign policy back.

And your phone is ringing.