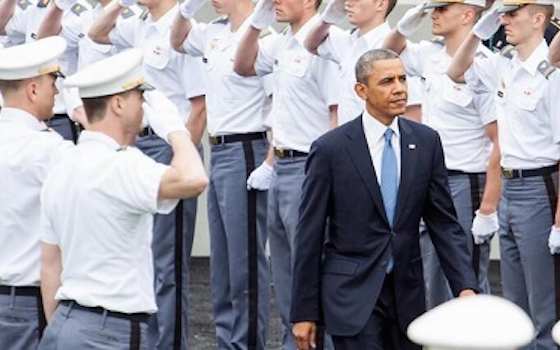 President Obama, in his West Point commencement address the other day, went to unusual lengths to explain and defend a foreign policy that critics have argued is entirely too cautious in addressing America's challenges abroad.

As he ticked off everything from Russia's muscular moves against Ukraine to the Syrian civil war and the threat of development of nuclear weapons in Iran, the president applied the measured reasonableness that so irritates those critics, mostly but not entirely in the opposition party.

The centerpiece of his position was that in today's complicated and demanding world, American military power is an essential element but not the only weapon in a president's "toolbox." He cited diplomacy and other alternatives as also vital to achieve peace and comity among disparate nations.

His preference, and even penchant, for speaking softly per the old Teddy Roosevelt axiom does leave him wide open to the barbs and insults from the likes of the seldom subtle Republican Sen. John McCain. At the same time, however, his look-before-leaping manner has the virtue of allowing more dispassionate response to challenges best served without undue bombast.

Obama told the West Point graduates that "according to self-described realists, conflicts in Syria, or Ukraine or the Central African Republic are not ours to solve. And not surprisingly, after costly wars and continuing challenges here at home, that view is shared by many Americans."

He noted that "interventionists from left and right" argue that "we ignore these conflicts at our own peril; that America's willingness to apply force around the world is the ultimate safeguard against chaos, and America's failure to act in the face of Syrian brutality or Russian provocations not only violates our conscience, but invites escalating aggression in the future."

In acknowledging such reactions, Obama conceded rhetorical ground to his adversaries, but then countered it with his central point: "But to say that we have an interest in pursuing peace and freedom beyond our borders is not to say that every problem has a military solution. ... U.S. military action cannot be the only, or even primary, component of our leadership in every instance."

The distinction may have seemed an odd one to be pointing out to young men and women embarking on leadership roles in the military, and the speech overall had few lines that drew much applause from them. In a sense, it was quite in the Obama style to offer a moderate explanation for his now-familiar measured and cautious modus operandi.

Taking note that four earlier West Point graduates killed in Afghanistan were part of his 2009 "surge" of troops there, the president told the 2014 class, "I would betray my duty to you and to the country we love if I ever sent you into harm's way simply because I saw a problem somewhere in the world that needed to be fixed, or because I was worried about critics who think military intervention is the only for America to avoid looking weak."

But he also reassured to the graduating cadets, in a line that did draw heavy applause: The United States will use military force, unilaterally if necessary, when our core interests demand it -- when our people are threatened, when our livelihoods are at stake, when the security of our allies is in danger. In these circumstances, we still need to ask tough questions about whether our actions are proportional and effective and just. International opinion matters, but America should never ask permission to protect our people, our homeland or our way of life."

This basic reassurance to the latest West Point graduating class also served as a defense against the sharp criticism from conservative interventionists that Obama had to know his speech would draw. But in laying down his oft-stated view that America cannot be the world's sole policeman as long as vital needs at home go unmet, he was signaling the same course for his remaining two years in the Oval Office, whatever laments about his calculation and restraint may bring.