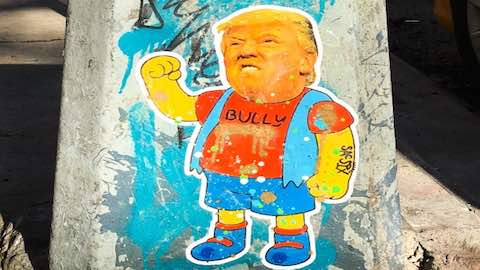 If the latest lewd video of Donald Trump has taught us anything, it's the danger of rewarding oppressive workplace behavior.

Months back, The New York Times reported on a pattern of Donald Trump’s vulgar behavior with women. Trump refuted every last accusation.

It’s only now that a video of Trump’s inappropriate behavior in action has come to light that the nation believes he’s the type of man that several women have alleged him to be.

Another recent article described how Donald Trump triggers victims of domestic abuse. I am a trauma survivor and an abuse victim, and I’ve been triggered by the GOP candidate myself.

My bully, Alan Hutchison, was my supervisor at work. I was 25 and working at a medical software company, Epic Systems. He was my senior on a project at a hospital.

The project was ambitious, but I was more than competent at my job. I’d just gotten a stellar performance review.

Trump and my bully exhibited similar personality traits. The difference is that my tormentor, who was gay, had no interest in grabbing my genitals.

Within six months, shortly after I bought my first house, Alan got me fired.

During those months, he gave me conflicting orders to guarantee that I’d disobey one, or he’d instruct me to do things that were bad for our client, and pressure me when I refused. I would be in trouble either way.

He forbid me to give clients the instruction manual for the software our company had sold them. He continued to add tasks to my workload, jeopardizing our ability to complete the project on time.

And sometimes, he just plain lied.

He had no qualms about harming the hospital in order to bully me.

And there was no incriminating video to prove my case.

I lost my job for “customer dissatisfaction.” I lost my house and all of my savings with it.

The customers took me out to dinner a few weeks later. Their manager was furious when he found out I was let go. It took three people to replace me, they said.

Years later, a coworker on the project told me our company almost lost the entire account, and firing me was the start of their souring relationship with the client.

A decade later, I still have nightmares about my antagonizer.

I think we have two lessons to learn from my experience and from the recent Trump tape.

First of all, victims of bullies often aren’t believed. The bullies are smooth operators. They deny everything and choose their victims well. It can take a leaked video before a bully is caught.

Second, it’s not just bad to put a bully in charge at work -- whether in the White House or any other job -- because they’re mean to their subordinates. It’s also bad for the company -- or, in this case, the country.

My bully put the work we were doing together in jeopardy in order to terrorize me. No company -- or nation -- can afford to have an employee sabotaging their project.

But workplace bullying is legal, and companies tend to promote bullies, not fire them.

My bully still holds his job. And although the odds aren’t in his favor, Trump isn’t out of the race just yet.

If Trump can give one gift to this nation, it’s shining a light on these oppressors and the danger of tolerating them.

OtherWords columnist Jill Richardson is the author of Recipe for America: Why Our Food System Is Broken and What We Can Do to Fix It. Distributed by OtherWords.org.