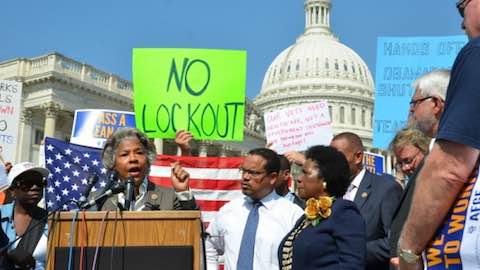 Every federal budget is a dream sheet. They’re all unrealistic.

It goes something like this: The president lays out a slate of new programs, revenue raisers, and strategic cuts. Then Republican leaders pull out their X-Acto knives, highlighting cuts to programs they oppose. Then the more conservative caucuses sing, with apologies to Irving Berlin, “whatever they can cut, I can cut better.”

But budgets also serve real purposes. They dictate how much money can be spent in a given year, give directions on how to prioritize that spending, and draw a vision for how to move into the future.

It’s natural to expect some posturing in the budget process. But this year, every single budget starts with unrealistic assumptions that the other side will never agree to. The focus is all vision and politics. Utility is ignored.

President Barack Obama’s request, for example, assumes massive increases in infrastructure spending, a rollback of special interest tax breaks, the passage of immigration reform, and no major changes to deal with the fiscal challenges facing Social Security and Medicare. All told, it claims to produce $3.64 trillion in savings over 10 years.

But Congress has already said it won't enact these policies. In fact, many of the same ideas were rejected in the last budget -- and, in the case of certain tax breaks, in every one of Obama's budgets. Why would this change in an election year?

The House's proposed budget also turns a blind eye to political reality. To amass its $7 trillion in savings over a decade, it repeals the Affordable Care Act, aka Obamacare ($2 trillion), and makes structural changes to Medicaid ($1 trillion). It also cuts -- and then freezes for nine years -- all non-military spending ($887 billion), while increasing Pentagon expenditures every year.

Even with low inflation, the idea that Washington will go several years without spending one more dime on government outside the Pentagon is laughable. Whether you like it or not, the likelihood that Obama will make one of his last acts as president repealing his signature health care legislation is less than nil.

House conservatives go even further, claiming that their budget would save taxpayers $8.6 trillion over the next decade.

Faced with all these competing budget proposals, it looks like the budget and appropriations train is about to derail without leaving the station.

The conservative House Freedom Caucus has raised objections to $1.07 trillion top-line spending level in the standard-issue House budget -- preferring the $1.04 trillion originally included in the Budget Control Act of 2011 instead. Senate leaders want to stick with the $1.07 trillion figure, though they may not even produce a budget resolution. House Speaker Paul Ryan says it's $1.07 trillion or bust.

All signs point to another “omnibus” spending bill, negotiated behind closed doors in the House speaker’s office, to close out Obama’s last year in office.

It doesn't have to be this way.

As budgets are political documents, there will always be some disagreements. But the gulf between Congress and the president, between Republicans and Democrats, the House and the Senate, and even within the House Republican majority ranks is only getting larger. There are plenty of ideas that could find bipartisan agreement, but everybody’s talking past each other.

What we really need is leadership. Budgeting based on politics, accounting gimmicks, and the legislative equivalent of putting your opponent between a rock and a hard place hasn’t worked.

We need lawmakers who are willing to step up, consider the national interest, and say no -- my parochial project isn't the most important thing today. We need folks who will put it all on the line to tackle the big issues facing our country.

We may all be watching the circus in the presidential primary, but the show in Congress is just as ridiculous.