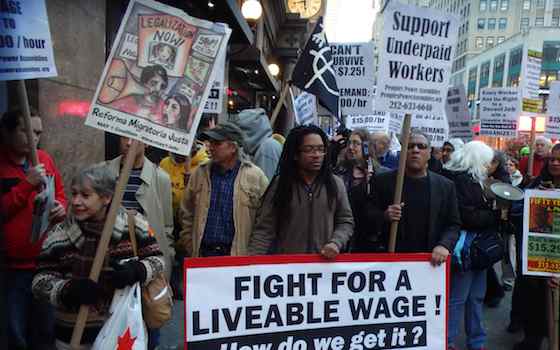 Why on earth would anybody oppose raising the minimum wage in America to 10 bucks an hour -- a level no working adult would recognize as livin' large? I can think of two reasons.

Actually, there are three, considering that President Barack Obama has come out in favor of the wage hike. That alone is sufficient to fire up the Mighty Wurlitzer of Republican Doomsaying. But let's stick to substantive objections.

The first is that any increase in wages will come at the expense of profits for employers. This objection is perfectly true and valid, but it falls into the category of Topics We Don't Mention in Public. I'll leave it to readers to guess where conservatives' sympathies lie with respect to employers vs. employees, and where the general public's lie.

The second objection is a bit trickier. It is the contention that raising the minimum wage will throw people out of work. Recently, conservatives latched onto a report by the Congressional Budget Office that examined the expected impact of a bill that would raise the federal minimum wage to by 2016. The CBO seemed say that raising the wage would cost 500,000 jobs.

Oh, what a heaven-sent bombshell! The do-gooder liberals are handing out freebies again, even at the expense of ruining job growth.

The only thing missing from this argument is context.

As economist Dean Baker pointed out, the report actually said that 500,000 fewer people might be employed in low-wage work. The figure wasn't an estimate of outright job loss. "This is an important distinction," he wrote. "These ... tend to be high turnover jobs, with workers often staying at their jobs for just a few months."

Economists don't agree about, and they certainly can't predict with certainty, how employers will respond to a higher minimum wage. Fair-minded proponents of the minimum wage increase must admit that jobs might be lost, some businesses might go under (especially small businesses) and that many entering the low-wage workforce might face more difficulty finding a job. The question, though, is whether those adversities are offset by the benefits that accrue from higher wages for those at the bottom of the heap.

This is the part of the CBO report critics were largely silent about: It estimated that 900,000 people would be lifted above the poverty level and more than 16 million people would see a significant boost in their family incomes.

Low-wage workers are not primarily a bunch of pimply teenagers working a few odd hours for extra spending money. The report noted that, of the 5.5 million workers who earned within of the minimum wage in 2013, three-quarters were at least 20 years old and two-fifths worked full time. A 39 percent raise for these people means fewer families in poverty, more consumer demand -- which our economy desperately needs -- and a shot in the arm for the American work ethic. If we want people to value and honor work, after all, work must pay.

One grim truth about the U.S. economy over the last 40 years is that the fruits of steady growth and impressive increases in productivity have not been shared with labor. As Baker and Will Kimball, a colleague at the , have pointed out, "If the minimum wage had kept pace with productivity growth it would be in ." As it happens, the wage has eroded. If you compare by purchasing power, the minimum wage in the late 1960s was almost an hour higher than it is now.

Low-wage workers haven't claimed their share of our prosperity because they have almost no bargaining power. And that's one of the strongest arguments in favor of a minimum wage in the first place.

To see how this works to good effect in the labor market, consider what Glenn Murphy, CEO of the , announced this week. His company is raising the wage of its lowest-paid workers to by 2015, and to this year. The raises will affect about 65,000 workers at the company's Gap, , and other stores.

"To us, this is not a political issue," Murphy said in a letter to employees. "Our decision to invest in frontline employees will directly support our business, and is one (that) we expect to deliver a return many times over."

Think of the implicit wage negotiation when Murphy sets out to hire frontline employees. Bargaining begins at the federal minimum wage (or state minimum, if there is one). But he has to offer more, because he wants better employees than or .

To Murphy, this is a business decision. The rest of us have some say in the wages he pays, however, and make no mistake, it is a political decision. We, the electorate, get to decide what a fair wage is at the bottom of the scale. And it's time for a raise.