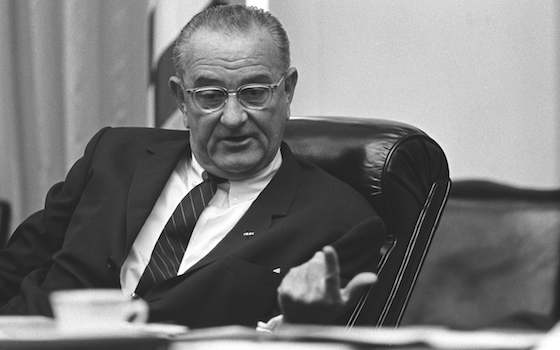 President Obama's speech at the 50th anniversary of the enactment of the Civil Rights Act inevitably invited further comparisons with its ultimate champion, President Lyndon B. Johnson.

Obama pointedly talked of LBJ's crowning achievement in terms of his own political rise to the Oval Office, as a man of mixed racial heritage and the educational advantages that paved the way for his route to the presidency. Thanks to Johnson's leadership, he said at the in Austin, "new doors of opportunity swung open, and that's why I'm standing here today."

But the occasion also inevitably encouraged further comparisons of the Johnson and Obama presidential styles. LBJ's in-your-face aggressiveness toward is regularly mentioned alongside Obama's alleged aloofness in coping with pushback against his more modest legislative initiatives.

Obama in Austin cited a certain kinship between his beleaguered health-care insurance law and LBJ's efforts for what became . That law also encountered much partisan political opposition but today has become a staple of the nation's social safety net for the elderly.

Johnson owed much of his success not only to his famous personal brow-beating of senators who bent to his will as perhaps the most effective majority leader, but also to his equally famous schmoozing with them. Obama's critics find him deficient in both departments, perhaps more a matter of personality than of will.

But LBJ had more than a decade in that position to build positive working relationships there, and he faced a different breed of Republican opposition. It was personified by the minority leader of the time, Everett McKinley Dirksen of Illinois, who often bought into the concept of compromise so rare today. Obama in contrast spent only two years in . To him, legislating never seemed to be much a matter of personal relationships.

In pursuing the civil rights legislation already undertaken by John F. Kennedy before his death, Johnson invoked the tragedy of the assassination by pleading memorably to : "Today, in this moment of new resolve, let us continue." In 1964 it did so, and the next year he also pushed the landmark Voting Rights Act that barred racial discrimination, empowering the federal government to enforce it in recalcitrant Southern states.

Obama, on assuming the presidency, seemed to some members of the to be excessively cautious in pushing its agenda regarding matters of racial equality and justice. Upon his re-election in 2012, he appeared to be somewhat more outspoken, but when the recently ruled that federal monitoring of some of those states was no longer warranted, he said only that he was "deeply disappointed." He made no mention of it in the text of his Austin speech, saying only "we are here today because we know we cannot be complacent," and that continued "vigilance" was required.

LBJ's comprehensive Great Society program of social justice was also honored at the event, including his War on Poverty that many critics have declared a failure despite demonstrable gains short of "victory." That and his pursuit of the war in Vietnam remain blights on his overall presidential legacy. Without Vietnam, Johnson might have been considered among the most effective of American chief executives.

Obama's legacy is already assured as the first African-American to attain the presidency. But it is tainted so far by difficulties with his health-care law that keep it shrouded in controversy and an uncertain future. Unlike LBJ and his Vietnam albatross, however, the judgment on Obama and Obamacare is yet to be resolved, with nearly three more years left in his term.

Unlike Johnson's fate, Obama's performance as a wartime president offers hope of a more credible outcome, with American combat troops already out of Iraq and in the process of withdrawal from Afghanistan.

LBJ in 1968 said he chose to leave the presidency to concentrate on ending his war, but he failed. Obama is getting out of his wars without being able to declare real victory in either place. So, tentatively at least, the two Democratic presidents may in the end share of the same unfulfilled legacy.