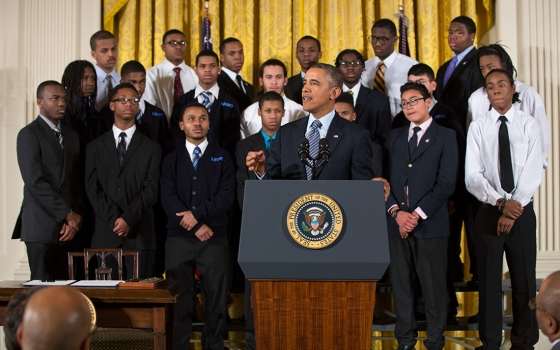 It's not hard to persuade hardcore conservatives to turn against their own ideas, as soon as President Barack Obama agrees with them.

You can see and hear that in the chilly shrug that some folks on the political right are giving to the president's new "My Brother's Keeper" initiative -- a five-year, public-private partnership aimed at helping at-risk minority youths.

Ever since "The Negro Family: The Case For National Action" by then-Assistant Labor Secretary Daniel Patrick Moynihan sounded an alarm in 1965, conservatives have implored liberals to promote the undeniable value of fathers and two-parent families.

Liberals have argued back that rising fatherlessness, most severely but not only in black households since the early 1960s, is a disastrous long-term consequence of global economic change and lost low-wage manufacturing jobs. As William Julius Wilson concluded in his 1996 book, "When Work Disappears: The World of the New Urban Poor," as jobs went away, so did families with fathers at home.

Can we at least agree in assessing a problem this complex that both sides are right -- that, for the good of our children, jobs and two-parent families go hand-in-hand?

Yet cynics like conservative talk show host Rush Limbaugh brushed past that core issue to play the "what if" game. "What would happen," he bellowed in an on-air rant, "if Bush, Romney -- take your pick of any Republican president -- said, 'I'm going to have a brother's-keepers program specifically for our white children?' There'd be a national outcry!"

He rambled on to suggest that liberals are pushing Obama to show "the proper black favoritism." "That's racism by the way, folks," he concluded. "That's racism."

That's baloney, I say. But what else should we expect from someone who makes a living by fanning the paranoid resentments of others?

Yet even reasonable thinkers like Roger Clegg, president and general counsel of the conservative , hear the thundering jackboots of "government-sponsored discrimination," as the headline on his National Review Online essay put it, in Obama's focus on black and Hispanic youths.

"It is almost always unconstitutional for the government (and any private program that receives federal money) to discriminate on the basis of race and ethnicity," he writes. "There is no 'compelling' interest to do so here. ... This is just another kind of 'profiling.' "

Besides, he writes in his closing kicker, "What kind of message is given to blacks and Latinos when they are told that their young men are so problematic that they have to be singled out for special help to ensure that they don't screw up?"

Well, one of the more positive messages to young black and Hispanic males would be that somebody cares about them. While upward mobility also has stalled for many white youths over the past half-century, segregation by race and class stubbornly persists, leaving today's low-income nonwhite kids more stranded than ever from the socioeconomic mainstream.

"I didn't have a dad in the house," Obama said, connecting his own experience to today's disaffected minority youths. "And I was angry about it, even though I didn't necessarily realize it at the time. I made bad choices. I got high without always thinking about the harm that it could do. I didn't always take school as seriously as I should have. I made excuses. Sometimes I sold myself short."

The bottom line, as the president pointed out, is that minority boys are in trouble. Poor school performance, truancy, delinquency and, ultimately, high incarceration rates stem from and contribute to an out-of-wedlock birth rate of 72 percent in black households, 53 percent in Latino households and 29 percent among non-Hispanic whites.

Obama's initiative aims to expand access to health, nutrition, high-quality early education and job opportunities, while partnering with police and local communities to reduce violence. An interagency task force will assess what existing federal programs can be improved upon, but aims to rely less on the government than support from the business community and nonprofits.

When Wall Street and the auto industry fell into crisis, the government responded with billions of dollars in targeted action. Jobs and economic growth were rescued. Minority kids in crisis need targeted help, too. To claim otherwise uses desegregation as an excuse to ignore segregation.