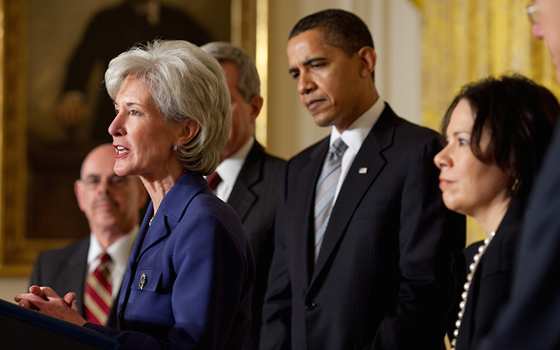 Dictionary.com offers two definitions for scapegoat: "1. A person or group made to bear the blame for others or to suffer in their place; 2. Chiefly biblical. A goat let loose in the wilderness on Yom Kippur after the high priest symbolically laid the sins of the people on its head. Lev. 16:8,10,26."

Both definitions seem to fit the announcement of the "resignation" of Kathleen Sebelius, secretary of , who presided over the disastrous rollout of the government's website, healthcare.gov, which was supposed to provide easy access for people who wished to sign up for Obamacare.

It wasn't entirely Sebelius' fault, though her experience with a website when she was governor of Kansas should have sounded alarm bells. As The Daily Caller website reported last October, "Sebelius oversaw numerous costly and disastrous government website projects during her six-year governorship ... including a failed update of the program to provide unemployment pay and other services and similar updates pertaining to the and the state's services."

Kansas Labor Secretary Karin Brownlee told the Daily Caller about this: "In the , I chaired the Commerce committee. We had oversight over the . For years, we watched as the under Sebelius worked on that computer program. After seven years and , something should work."

When you're spending taxpayer money, apparently successful outcomes is not a requirement.

Sebelius was tasked with putting the square peg of government into the round hole of free enterprise and competition. It didn't work in Washington any better than it did in Kansas. The problem wasn't just the Obamacare website. The problem was, and remains, Obamacare itself.

Those who have been paying attention know that the administration's claim to have signed up more than 7 million people during the open enrollment period is bogus when one-fifth of those who are counted as "enrolled" have not paid their premiums. Costs have escalated, possibly discouraging new customers. Only 14 percent of those who have enrolled in Obamacare were previously uninsured, according to a management consulting firm report cited by .

In addition, found that, according to , "only 48 percent had thus far signed on for a 2014 health plan. Within that 48 percent, three-fifths were previously insured people who liked their old plans and were able to keep them. The remaining two-fifths were the ones who signed up for coverage on the Obamacare exchanges. Of the Obamacare sign-ups, only 27 percent had been previously uninsured in 2013. And of that 27 percent, nearly half had yet to pay a premium. (By contrast, among the 73 percent who had been previously insured, 86 percent had paid.)"

In an April 9 article for Psychology Today, John C. Goodman, Ph.D., and author of "Priceless: Curing the Healthcare Crisis," writes the reason that Obamacare is failing to deliver on the president's promises is that "...the administration had to appease every single Democratic constituency and every major special-interest group. Imagine going around a table and asking each group what is the one thing they must have in order to support the legislation -- the insurance companies, the drug companies, the hospitals, the labor unions, AMA, , etc., and no one making sure that all the separate demands fit together in a sensible way."

The question remains: Why do so many people put their faith in government, when it does so few things well and with efficiency and reasonable cost? We don't even seem to be able to win wars anymore, so why would anyone have faith that the government can do a better job of directing health insurance and inevitably dictating who gets health care and who does not than the private sector, or at best a private-public partnership?

President Obama's nominee to replace Sebelius, budget director Sylvia Burwell, might turn out to be better at fixing websites, but she doesn't have the power to fix Obamacare. No one does because it is based on a weak foundation and the notion that government can do anything. Obamacare is the wizard behind the curtain, but without the glimmer of Oz to back it up.