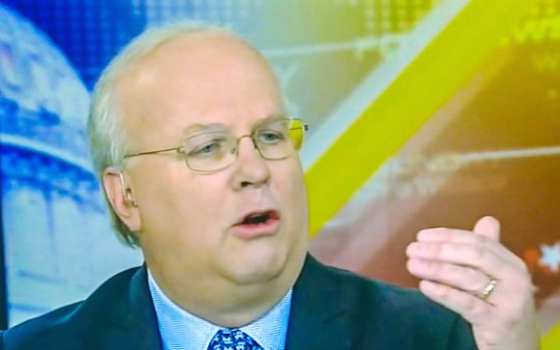 Many of you know that I'm not Hillary Clinton's biggest fan.

But I would never question whether she was right in the head. Instead, what bothers me is that dark, crusty clump of carbon that some may confuse with a soul.

Before crazed hordes of Benghazi Deniers (in and out of journalism) shout me down with angry cries of "What difference, at this point, does it make?" let's stipulate something:

Karl Rove, the Rasputin of the establishment , has played another dirty trick. This time the target is Hillary, and this one is beneath contempt, even for Rove.

And for that he should make a full and public apology.

Rove, like most establishment attack dogs, is more worried about tea party conservatives than Democrats. But his attack on Clinton shows how low he can go.

According to the , Rove is trying to take political advantage of the former secretary of state's blood clot in 2012, hinting that she suffered brain damage.

"Thirty days in the hospital?" Rove was quoted as saying the other day. "And when she reappears, she's wearing glasses that are only for people who have traumatic brain injury? We need to know what's up with that."

On Tuesday, Rove stammered through an attempt to clarify his remarks.

"Wait a minute -- no, no -- I didn't say she had brain damage. She had a serious health episode," Rove told . "My point was that Hillary Clinton wants to run for president, but she would not be human if this didn't enter in as a consideration."

And here's my point, Karl, whether you like it or not.

Clinton did take ill in 2012. And there have been responsible questions as to her health and age, given that she's an unannounced 2016 presidential candidate and is considered by Democrats to be Hillary the Inevitable.

But the way Rove played this has me wondering:

Does Rove have a brain? Or is that just a bloodless spider running around in there behind those twitchy eyes?

The grown-up way to answer a question about Mrs. Clinton's health was demonstrated by Lynne Cheney, the wife of former Vice President Dick Cheney.

I asked Cheney about Rove's brain-play when she was a guest on my radio program Tuesday to talk about her new book on James Madison, fourth president of the United States, who helped craft the Constitution.

"Well, I just can't comment at all," said Lynne Cheney on Rove's nonsense. "I think you would need a great deal more medical expertise than I have to understand a question like that. I have no reason to believe that's the case."

Cheney, a Republican, has spent her life in politics and government. She's also taken legitimate political shots at Hillary Clinton.

But she wouldn't play doctor, as did Rove.

It's a classic trick, making an outlandish or controversial claim, then having the propriety of the claim repeated and debated, and going on TV to "clarify" the offending remarks.

And all the while the rusty knife is jabbed into the target again and again.

The right watches Fox, and the left watches all those other news shows, on the old-line networks, and MSNBC and and .

While Rove thrusts and jabs, Axelrod seems constantly shocked by Republicans. It's his theatricality that's amusing, as if he's some kind of perpetual virgin, emotionally traumatized by the vulgarities of the opposition.

I assume he'll continue in this role with his new client, England's , expressing constant shock and outrage at anything moving to his right.

Axelrod got his start in Chicago, blossoming under the Daleys. And Rove may have played his first political dirty trick here.

He was 19 or 20, a Republican trying to undercut Democrat Alan Dixon, a future U.S. senator who was campaigning for Illinois state treasurer in 1970.

Gene Callahan, the longtime Democrat who was close to Dixon, recalled Tuesday that Rove filched some Dixon campaign stationery, and passed them out to the homeless on Skid Row inviting them to a party.

"Rove put out this invitation on Dixon stationery saying everyone was invited, free booze, free girls, and free everything. We had all kinds of street people coming in drinking everything, eating all the hors d'oeuvres.

"Tom Loftus, the press secretary calls me, 'You won't believe this! They're eating and drinking everything and the press is here!' But Alan Dixon handled it well.

"He was a Democrat, and he said it takes all kinds to win, and everyone was invited," Callahan said. "And he won."

Rove grew to be a top Republican consultant, so crafty that he was an aide to President George W. Bush.

Bush had two nicknames for Rove. One was "Boy Genius," which doesn't apply these days, but there was another. Bush called him "Turd Blossom."

Clinton is far too gracious to use it, at least in public. But I will.