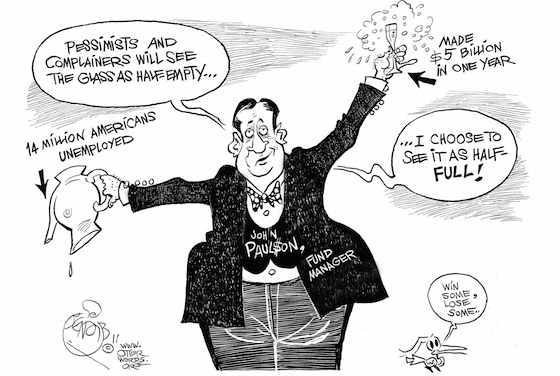 Who's the most befuddled Wall Streeter of all? The richest guy on the Street.

In assessing the spreading public protest against the rampaging greed of today's financial elite, John Paulson turns out to be as confused as a goat on Astroturf.

Oh, he gets that the people's anger is directed at hedge fund profiteers like him, but he claims they are simply confused on the virtue of accumulated wealth. Although he raked in nearly $5 billion in personal pay last year (the largest single haul in Wall Street history) from rigged Wall Street casino games, he asserts that the amassing of wealth itself serves the public good.

It's unfair, Paulson scolds, that protesters demonstrated in front of his 28,000-square-foot, $15-million mansion on New York's Upper East Side, targeting him as an example of plutocratic excess. Taxes from billionaires like him, he says, are "providing huge benefits to everyone in our city."

Besides, he points out that he's not merely a billionaire, but also a "job creator," as Republican leaders prefer to call corporate chieftains these days. Paulson brags that his hedge fund "has created over 100 high-paying jobs in New York City since its formation." Wow — 100 jobs in a city of over 8 million people.

Thanks, John. Our economy wouldn't be the same without you.

When it comes down to it, all that Paulson's clique really wants is a little love, a small show of gratitude for all that the richest 1 percent is doing for us 99 percent of Americans by making themselves ever-richer.

In a plaintive press release, he recently wrote that, "Instead of vilifying our most successful businesses, we should be supporting them and encouraging them."

Isn't it sad to hear John cry? But, then, he does have $15 billion in net worth to dry those tears.

- Originally published by Other Words