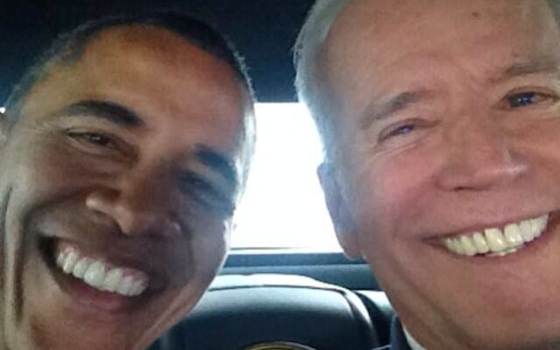 One of the enduring misperceptions of American politics is that the vice presidency is a steppingstone to the presidency. Of the 47 men who have held the office, only four were elected to the Oval Office as sitting standbys: Adams, Jefferson, Van Buren and, 152 years later, the senior George Bush. And, of these, only Jefferson was given a second term.

This bit of history has not discouraged the widespread impression that the individual "a heartbeat away" from the presidency has some kind of leg up on competitors for the office. Rather, it has taken eight presidential deaths and one resignation to elevate the other veeps who have reached the presidency directly from the second office.

All of this underscores the fact that the current occupant, Joe Biden, as he waits in the wings, has little historical claim on being elevated by the votes of the American electorate in 2016. Furthermore, the looming specter, if it can be called that, of former Obama Secretary of State Hillary Clinton as a prospective candidate for the Democratic nomination casts a heavy shadow over the Biden opportunity.

Yet Biden's lifelong record of high-level public service, and his own disinclination to remove himself from the speculation, keeps him in the spotlight to the degree that any mention or appearance garners news media attention. The recent "selfie" with President Obama taken as they shared the back seat of a car went, as they say these days, "viral." Who, America wonders, took it?

Similarly notable was a recent interview with the president in which he said of his sidekick: "I've got somebody who I think will go down as one of the finest vice presidents in history ... a great partner in everything that I do." Obama, however, went on to add: "I suspect that there may be other potential candidates for 2016 who have been great friends and allies."

Tantalizing no doubt to some, he continued: "I know that we've got an extraordinary secretary of state who did great service for us and worked with me and Joe to help make our country safer." That, presumably would be Hillary? Or could he have been referring to the incumbent, John Kerry? The reading of tea leaves goes endlessly on.

A new book about to be published by reporter Jo Becker reports that in 2012, when Biden responded to a question on "Meet the Press by declaring his support of same-sex marriage, adviser Valerie Jarrett accused him of "downright disloyalty," and in effect forced Obama's hand to make a similar declaration.

Becker writes that Biden said he didn't volunteer the observation but had to respond to the question asked. Later, Biden said elsewhere that Obama, on learning of his vice president's jumping the gun, just laughed and said he knew Biden in character would respond as he did.

Former Obama political strategist David Plouffe, once discussing Biden's penchant for speaking his mind as a factor in considering him as Obama's running mate, noted "it was in his DNA and we couldn't expect that to change."

Nevertheless, such incidents inevitably are recycled as long as Biden remains in the speculation about the 2016 presidential race. Biden himself has said, "There may be reasons I don't run but there's no obvious reason why I think I should not run."

This argument is more valid these days than in the earlier times when most vice presidents were little known and given little or no role in governing. At least since the presidency of Jimmy Carter presidency, who brought veep Walter Mondale into the West Wing and made him a working partner, most vice presidents have been so utilized, and Biden emphatically by Obama.

Had the previous standby, Dick Cheney not had a history of heart disease and declared from the start he would not seek the presidency, he almost certainly would have been considered a favorite to succeed George W. Bush as the Republican nominee in 2008.

So, while the vice presidency historically has not been an automatic steppingstone to the Oval Office, the broadening role of the office makes most occupants today clearly qualified for the presidency by virtue of the experience gained in serving, and that certainly is the case with Joe Biden.