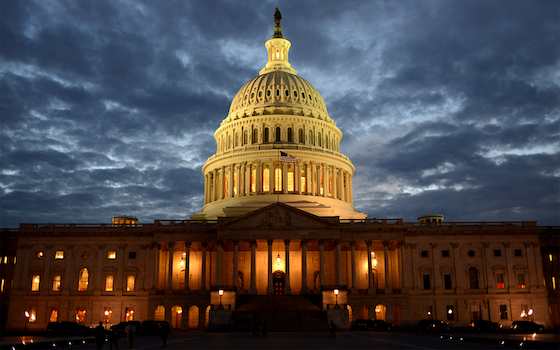 Is it possible that the adults in are finally taking over?

That prospect has reared its head in the decision of Republican leaders in both the House and to back away from another threatened government shutdown, by swallowing an uncomplicated vote to raise the federal debt ceiling.

First, House Speaker John Boehner looked down the black hole of government shutdown, a potential replay of the tea-party engineered kamikaze mission in October, and refused to lead his party into it again. Stunned conservatives found themselves on the short end of a 221-201 House vote boosting the debt limit, with no concessions offered.

When the issue moved to the , its one-man wrecking crew, freshman Republican Sen. Ted Cruz of Texas, tried to get a filibuster going. For a time it appeared the 60 votes to block him would fall short, requiring as it did that five Republicans would join the 55 Democratic and independent senators to push Cruz aside.

But in the end, the two ranking Republican leaders, Senate Minority Leader Mitch McConnell and Minority Whip John Cornyn, had enough of Cruz and his tea-party ilk. Like Boehner in the House, they saw the groundhog of another winter of obstruction popping up and decided to zap it.

McConnell and Cornyn, like Boehner, were willing to take a political bullet for their party. They invited tea party challenges to colleagues up for re-election in this year's primaries, by breaking with conservative orthodoxy against any higher federal spending.

In short order, 12 Republican senators switched, giving the leaders political cover, and Cruz's filibuster was strangled in its crib by a 67-31 vote. The debt ceiling was then raised on a straight party vote, 55-43, as President Obama had insisted from the start.

The outcome was an unvarnished victory for his position that it was the obligation of to pay the legitimate bills for financial obligations that the legislative branch itself had committed the nation to undertake. It frees both branches to address their mutual business through March 2015.

The vote to prevent another possible government shutdown came on a rare day of good news for the president regarding his embattled health-care insurance act. Obamacare gained 1.1 million new enrollees in January, exceeding the previous month, to a total of 3.3 million. It was still short of original predictions but included a significant sign-up of younger Americans, who are considered essential to achieve adequate financial support.

The key political question in all this is whether these hopeful signs will be sustained in the months ahead, and particularly whether a new climate of bipartisanship is in the making on .

Is Boehner in the House truly fed up with the antics of his tea party members, who seem determined at every turn to buck Obama above all other considerations?

And are McConnell and other Republican senators similarly fed up with Cruz' delusions of grandeur and presidential aspirations, pursued at the expense of a functioning ?

Unfortunately, the recent ray of hope that sanity may be creeping into the behavior in both chambers is being seen in a particularly critical political year, when the fate of the Obama presidency likely hangs on the outcome of the November congressional elections.

Unless the president can retain party control of , which the Democrats currently hold by five seats, and take over the House, where they need an additional 18 seats, he will face the prospect of more legislative gridlock the rest of his second term.

An opposition party encouraged to stay on the same uncooperative course, counting on more Obamacare woes to give the a realistic chance to win the in 2016, is the price Obama will probably have to pay if he fails to regain the congressional control he had in his first two Oval Office years.

But equally critical for him is whether Boehner, McConnell and other Republican adults on can return a more moderate posture to their own party, which in earlier days, as either the majority of the minority, was a working partner in conducting the nation's business.